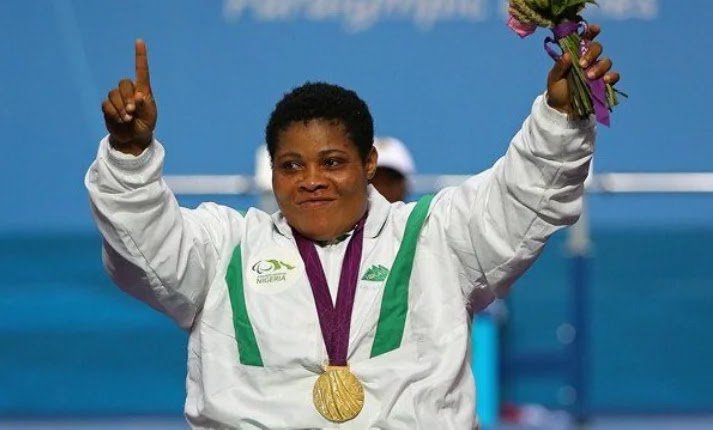 Nigerian athlete, Josephine Orji, on Wednesday shattered the World Record with a lift of 160 kg to win gold in the Women’s -84kg Power-lifting event at the ongoing Paralympics Games in Rio, Brazil.

The latest gold medal is Nigeria’s 8th at the event.

Nigeria now has 11 medals and is 10th on the overall medals table.

The Nigerian power-lifter was miles ahead of the other competitors as Poland’s Marzena Zieba who won Silver, finished with a mark of 134kg.

Netherlands’ Melaica Tuinfort who claimed the Bronze medal had a best mark of 130kg.

Orji showed that she was in for serious business from the start as she opted to enter the competition at 151kg.

That weight was the highest entered by any competitor thus forcing others to fight for the other medal spots as they didn’t come close to 150kg.

Having navigated her way past her opening mark, Orji initially failed her attempt at 154kg.

The determined Nigerian however picked herself up and came into her third attempt shattering the world record by lifting 154kg.

Cheered on by her compatriots and other fans in the stand, Orji activated her 4th attempt as she went for 160kg.

Although she lifted the 160kg to set the World Record, the official mark at the end of the competition remained the 154kg she lifted in her third attempt.

INTERVIEW: How Voice of Nigeria, VON, was badly mismanaged, with 6 of 8 transmitters lost – DG, Okechukwu