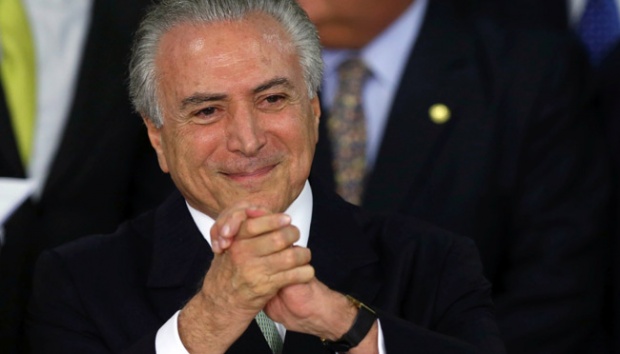 Brazilian president Michel Temer was booed as the 2016 Paralympic Games opened in Rio de Janeiro to a backdrop of colour, music and a powerful message of inclusivity.

Thousands of performers were involved either side of the two-hour procession of competing countries at the Maracana on Wednesday.

The News Agency of Nigeria reports that competition begins on Thursday, when Britain’s Dame Sarah Storey can become the most successful female Paralympian.

The opening ceremony began with American Aaron “Wheelz” Fotheringham, in a wheelchair, jumping from a massive ramp from the Maracana stands and performing a back flip through a giant ring.

The Brazilian national anthem was played on the piano by Carlos Martin, whose right hand is severely disabled, before the parade of athletes.

The loudest cheer of the night was however, as expected, reserved for competitors from the host nation.

Each nation carried a piece of a jigsaw, which bore the name of their country on one side and faces of competing athletes on the other.

Once completed, the jigsaw was adorned by the faces of every competitor at the 2016 Games.

All of the faces came together to form a beating heart, which began beating in time to the music.

One of the most striking parts of the ceremony was when bright lights temporarily ‘blinded’ the crowd to try and show spectators the reality Paralympic athletes face.

This forced them to rely on other senses such as hearing.

Rio 2016 organising committee president Carlos Nuzman was booed during his speech, as was Brazilian President Temer a short while later.

The South American country has been beset by political unrest.

Nuzman did manage to finish his speech, which spoke of building a “new world, more accessible to all and with no obstacles”.

Temer’s role was brief as he officially opened the Games and handed over to more performers.

Finally the flame was lit in driving rain, in front of a cheering crowd.

The passion of this helped influential official Marcia Malsar to her feet as she fell while carrying the torch.

The biggest concern for the Games was around a shortfall in funding, with the struggling Brazilian economy and low ticket sales.

This meant Rio’s organising committee had not raised enough money to fund the event.

Rio’s mayor Eduardo Paes had to secure an additional £36 million of funding and £24 million in sponsorship from state-run companies.

It helped the Paralympics to go ahead, but with cuts to the workforce and transport services as well as the closure of some media centres.

Ticket sales have improved, with 1.6 million sold of the 2.5 million available, after only 12 per cent had been bought just three weeks ago.

Prince Harry has made a donation to the #FillTheSeats initiative, which is working with Paralympics organisers to buy 10,000 tickets for local children.

There was also the ongoing saga of whether Russian athletes would be able to compete.

This was after a report commissioned by the World Anti-Doping Association found evidence of widespread doping across Russian sports.

But this was unlike the Olympics, which allowed individual sport federations to decide if Russians could compete at Rio 2016.

The International Paralympic Committee (IPC) has applied a blanket ban, which Russian officials unsuccessfully appealed against.

And concerns have been raised about whether the system used to determine the classifications athletes compete in is being manipulated to boost medal
chances.

British T37 200m sprinter Bethany Woodward, who has cerebral palsy and will not be competing in Rio, has criticised the British Paralympic Association (BPA).

BPA boss Tim Hollingsworth said no advantage was being sought for Britain’s 264 athletes in Rio.

The IPC says the system is always under review, while UK Athletics said it will look at classifications after Rio, standard practice for the body after every Games.

China are the Paralympics superpower, having topped the medal table at London 2012 with 231 medals, 95 of which were gold.

Russia came second four years ago, with 36 gold medals, but will not be in Rio because of their ban.

This gives Great Britain, third in 2012 with 34 gold medals, a great chance of moving up a place.

INEC may go ahead with Edo governorship election despite security warning