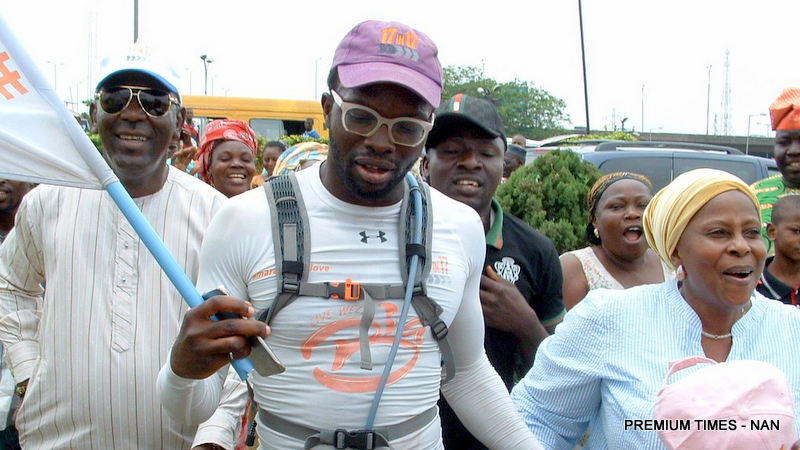 Fadesola Adedayo, the Canadian-based Nigerian marathoner, who began a 717km-long trek against the spread of Stevens-Johnson syndrome (SJS) from Abuja on May 13 finished at about 1.30p.m., on Monday in Lagos.

The marathoner, who ended his solo marathon at the Gani Fawehinmi Freedom Park in Ojota, a suburb of Lagos, told newsmen that his efforts were bound to yield dividends to combat the SJS.

The News Agency of Nigeria (NAN) reports that Stevens – Johnson syndrome, a form of toxic epidermal necrolysis, is a life-threatening skin condition, in which cell death causes the epidermis to separate from the dermis.

The syndrome is thought to be a hypersensitivity complex that affects the skin and the mucous membranes.

The most well-known causes are certain medications (such as lamotrigine), but it can also be due to infections, or more rarely, cancers.

Mr. Adedayo said, “My dedication and commitment to raise greater awareness on the effects of abusing drugs and the need for more efforts to battle SJS are the motivations for my finishing this trek.

“The kind of media coverage that this project of mine has enjoyed will go a long way to raise the necessary awareness about SJS.’’

The News Agency of Nigeria (NAN) reports that Mr. Adedayo’s project is also in memory of his late older brother, Adeyosola, who died of SJS on March 20, 2012, in Lagos.

The late Adeyosola, a UK-trained medical doctor, died of the syndrome while he was administering free community health services.

“I have trekked an average of 44 kilometres daily and that is why we have tagged this idea 17-in-17.

“The awareness of SJS is a major instigator to raising funds to do research in the issue of diagnosis of the syndrome, “he said.

The marathoner, however, urged young Nigerians to dedicate themselves to humanitarian services that would fast track the eradication of poverty and killer diseases in the country.

The father of the marathoner, Dr Adesola Adedayo, told newsmen that he was inspired by the effort of his son against a life-threatening syndrome.

“This is a project that many more young people should recreate against other life threatening farces in our society,’’ he said.

Also, Abiola Adedayo, the mother of the marathoner, advised young people to influence progress and development of nations through inspired projects like that of her son.

She added that dedication and commitment were values that teenage Nigerians should be imbibing to better their lives and that of the nation.

Many killed, police officers thrown into River Niger as MASSOB protests in Delta