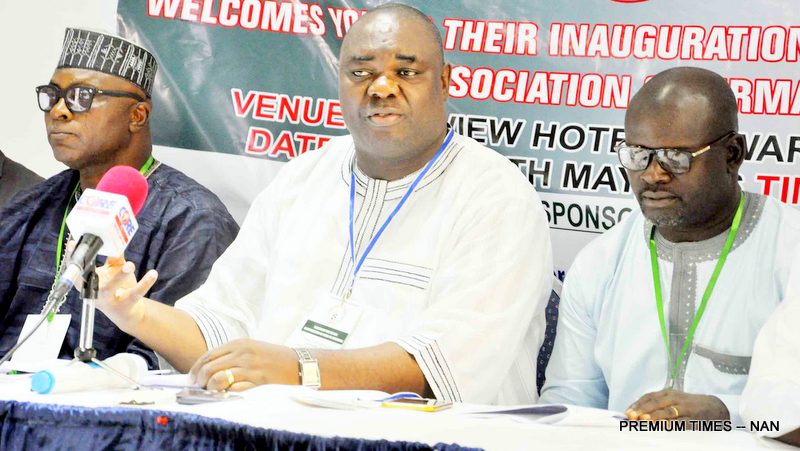 FROM LEFT: Members of a Faction of the Nigeria Football Federation (NFF), Adama Yahaya, Chris Giwa and Victor Barobote, at the inauguration of State Football Associations’ Chairmen in Abuja on Friday (20/5/16)

Police on Friday in Abuja arrested and released Chris Giwa after the inauguration of factional chairmen of State Football Association (FA).

The News Agency of Nigeria (NAN), reports that the police, led by the Divisional Police Officer for Gwarimpa, arrived at the venue of the inauguration with three Hilux truck-loads of policemen when the event had ended.

The DPO, who refused to mention his name, told Giwa that they had been instructed to stop any gathering before getting a counter order to bring him to the Commissioner’s office.

Additional 40 mobile policemen came to the venue, shouting “Where are they, where are”, they and attempted to seize the camera of journalists shortly after the DPO left with Giwa.

Giwa was released after spending few hours at the FCT Police Commissioners Office.

Giwa told journalists that he would have been surprised if the police had not come to the venue but added that nothing abnormal transpired at the commissioner’s office.

“They did the natural thing they ought to do if there is any gathering because they came to protect lives and property and as far as I am concerned what the CP did is the right thing.

“He must be proactive in case there will be break down of law and order which I am not praying for’’, Giwa said.

The inauguration saw 34 out of the invited 36 states and FCT chairmen inaugurated with a charge to take Nigerian football to the next level.

Giwa had before his arrest told the chairmen to pursue genuine development of the game in line with international best practice.

“History beckons on us to either stand firm for a course we believe in and seek justice, progress and development with a non-violent means or we leave town and watch the degradation of Nigerian football.

“Upon our election on Aug. 26, 2014, we have stood our grounds to be firm, business-minded and forthright.

“We thank Nigerians for the overwhelming reactions that have been pouring in since April 8, 2016 ruling of the Federal High Court, Jos.

“I am a stakeholder in football, I like every Nigerian who is qualified and has a desire to manage football freely and democratically to be anything in our football administration.

“No Nigerian anywhere will be happy with the present state of decay and financial challenge that our football has”, Giwa said.

A communiqué issued after the meeting and read by Shehu Adamu, a board member of the Giwa-led NFF, said that the newly inaugurated FA chairmen would begin work immediately.

“That we support the vision of the board led by Ambassador Chris Giwa’s vision for a community-based football development in the nation in all the six geo-political zones.

“That for the avoidance of doubt, that Article 1 .1 of the NFF Statutes 2010 states; ‘the NFF is a private organisation and associative in nature in compliance with the laws of Nigeria.

“FIFA should be aware that our football laws has made provisions for the steps so far taken in Nigerian football and we are so far satisfied with that,’’ the communiqué read.