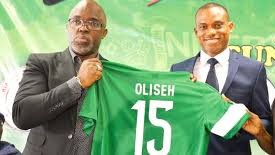 The President of the Nigeria Football Federation, Amaju Pinnick, has said the NFF does not regret choosing Sunday Oliseh as the country’s national team coach.

Speaking on the Tuesday edition of KAAKAKI, a breakfast programme on Africa Independent Television, the NFF boss said he and his board remained undeterred with the wave of criticisms that has greeted the appointment of Oliseh in some quarters.

Mr. Pinnick frowned at submissions by some persons about Oliseh being inexperienced, declaring that the Coach’s playing career that saw him winning the African Cup of Nations gold, silver and bronze, Olympic gold and starring at the very top level, plus post –playing career work with FIFA Technical Study Group, and technology, will take care of that area.

“We have no regrets appointing Sunday Oliseh. Other African countries were gunning for him, but he opted for his country. Oliseh’s stock in international football is high because apart from his work with FIFA, he has a company that trains and grades coaches all over the world.

“What the NFF, Oliseh, the LMC and other aspects of Nigeria football need is support from everyone, and patience, so that we can put in place our development programmes that will take the country’s game to new height.”

Oliseh was named replacement for sacked manager, Stephen Keshi, and unveiled to the public on July 16 at an elaborate ceremony in Abuja.

Although the former Super Eagles captain had been working underground; holding series of meetings and consultations with players he intends to work with, his first major test will come up next month when the Super Eagles file out against the Tafia Stars of Tanzania in their second AFCON qualifying match.

Oliseh has declared he wants a winning start in Dar es Salaam.