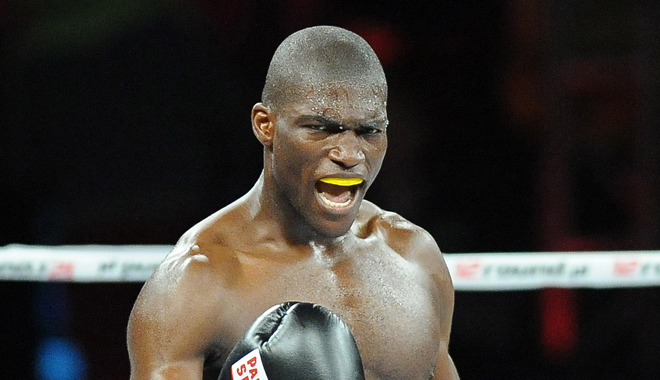 A Nigerian-born boxer, Izu Ugonoh, has become a YouTube sensation with a devastating knockout on opponent, Will Quarrie​,​ last Saturday in New Zealand.

The 28-year-old, born in Poland​,​ has been on the fringes of stardom for a long time but he seems to have finally broken that barrier with a knockdown that has been viewed on YouTube more than a million times.

A Twitter handle, @Breathesports reported it like this, “Heavyweight boxer Izu Ugonoh hit Will Quarrie so hard he landed in someone’s dinner…”

Quarrie has also become famous for that knockdown as he told News.com.au, “I’ll take the 1.3 million hits that it’s got on YouTube.” He also added that, “It was unfortunate, but that’s just heavyweight boxing.”

Ugonoh may have delivered that blow on account of the sparring sessions he had recently with Wladimir Klitschko and he revealed that the sessions were actually like real bouts.

He told boxingnews24.com in April that he had survived four training sessions with Klitschko. “This is the first time I can say that I’ve been in sparring where it doesn’t feel different from a fight situation.

“It’s an experience that can build up your mental toughness or it can make you want to quit your sport. It all depends on how you take it. I’m doing better and better with each sparring.

“I’m here helping the champ but at the same time this is a great opportunity to learn because this guy is going out a legend. Each time he tries to take my head off I see it as a compliment.”

Ugonoh is now undefeated in 12 fights with 10 won via knockouts.

You can watch the knockout here: