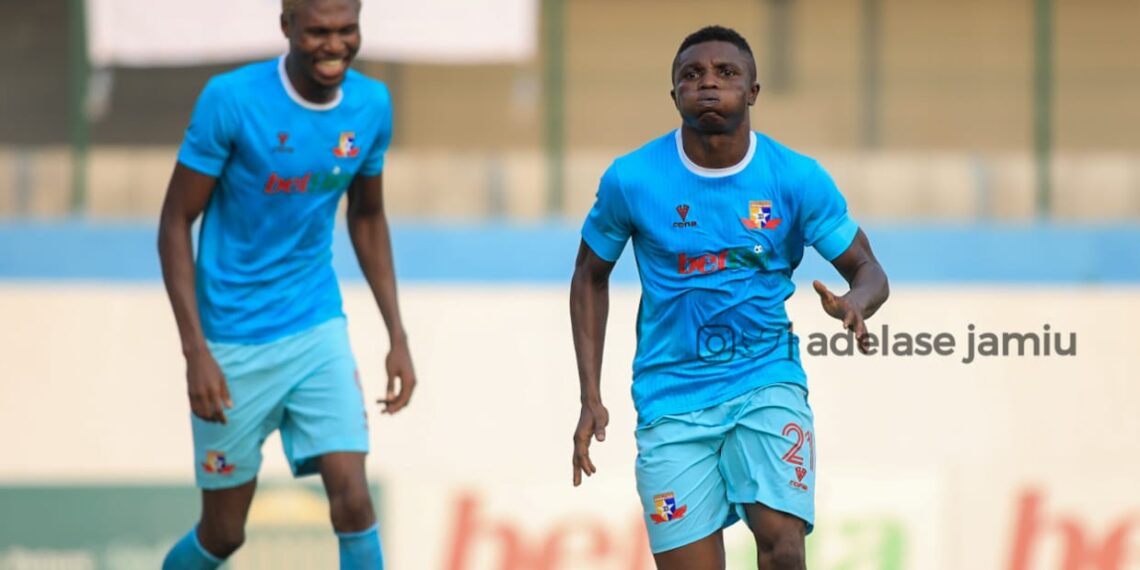 The much-anticipated southwestern derby which is the last of the matchday three fixtures of the Nigerian Premier Football League(NPFL) was played between Remo Stars and Shooting Stars at the Ikenne Township Stadium on Wednesday.

Remo Stars extended their dominance over their regional rivals with another 2-0 victory.

Being a derby test, it was much anticipated to be a masterclass of all the fixtures for the week.

Many were keen to see how coach Gbenga Ogunbote will fare in his first official visit to Ikenne since departing Remo last year and pitching his tent with Shooting Stars.

It wasn’t any good for the Oracle as his team were condemned to a 2-0 defeat by the hosts.

It was their first defeat of the season as they drop to the ninth position with two points.

Just as Remo Stars’ coach, Daniel Ogunmodede, told PREMIUM TIMES before the game that his boys will play with their heads, they did express it on the field of play with the Sky Blue Stars scoring two goals in the second half after a barren first half.

An own goal at the hour mark and a curler from substitute Godwin Odibo in the 70th minute saw Remo Stars overtake Bendel Insurance in the first position with nine points in Group A.

The first 20 minutes of the game saw the Sky Blue Stars pressuring the visitors for an early goal.

The teamwork between Olalekan Adedayo and Samuel Anakwe went futile after the latter player couldn’t attempt Olalekan’s final pass in the box.

At the start of the second half, Coach Daniel Ogunmodede made a tactical substitution with former IkoroduCity player Godwin Odibo brought in for Samuel Anakwe.

And in the 51st minute, substitute Odibo hijacked a flowing ball in the midfield and then sent a through ball to Andy Okpe who failed to connect with the ball.

Meanwhile, at the hour mark, Okpe was involved in breaking the deadlock for the Sky Blue Stars after receiving a counter pass from Dayo Ojo, the lanky striker drove into the visitors’ area before laying the ball for a 3SC player who scored in his own goal.

10 minutes later, substitute, Odibo doubled the lead for the hosts after slotting underneath goalkeeper, Adeniyi Bamidele to register his first NPFL goal since moving to Remo Stars from NNL side, IkoroduCity last year.

The visitors would have gotten what might have been a consolation goal but Ayo Adejubu failed to make an inviting cross in the 79th minute.

Remo Stars’ scintillating performance will be tested when they visit high-flying Bendel Insurance in Benin on Saturday.

Meanwhile, Shooting Stars who are yet to win a game this season will be playing against newcomers, El Kanemi Warriors, at the Lekan Salami Stadium on Sunday.

UPDATED: 2023: What PDP must do to replace its deceased governorship candidate in Abia