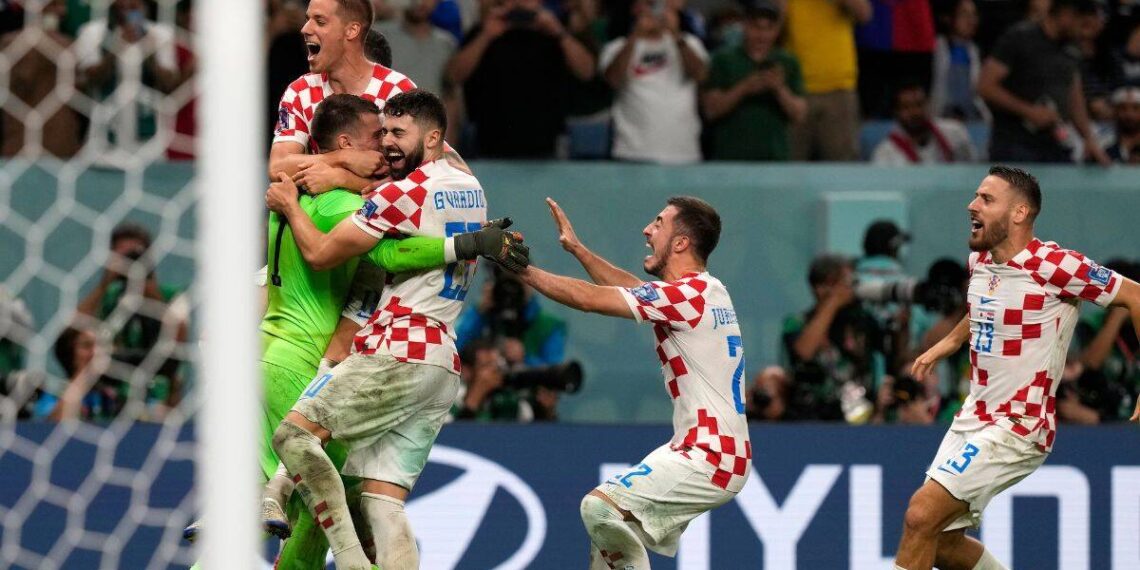 Japan vs Croatia at the World Cup

Just like in 2018, Croatia started their journey in the knockout phase with a penalty shootout win.

Croatia are through to the quarter-final phase of the 2022 World Cup in Qatar, but it wasn’t in any way easy as they required the lottery of penalty kicks to edge out Japan.

After battling to a 1-1 draw in the regulation period and extra time, Croatia prevailed 3-1 in the ensuing penalty kicks at the Al Janoub Stadium.

It was a similar scenario for Croatia in the 2018 Russia World Cup where they weathered the storm and went all the way to the final before losing to France.

Japan, who have recorded comeback wins in their previous World Cup games, scored first in Monday’s knockout tie against Croatia.

Maeda Daizen’s finish to Maya Yoshida’s flicking header at the cusp of the first half gave the Asians the lead.

However, the lead was cancelled 10 minutes into the second half by Ivan Perisic, who headed in Dejan Lovren’s cross.

The game then proceeded to the extra time and penalties where the Blazers defeated the Blue Samurai 3-1 with Dominik Livakovic becoming the hero of the day with a hat trick of saves during the shootout.

Following the kickoff, the Blue Samurai got the ball rolling, and three minutes later, Shogo Taniguchi’s header from a corner kick flew wide.

The Japanese then continued to advance against the left flank of the Croatians, toward Borna Barisic. After Daizen Maeda was unable to get a hand on Junya Ito’s cross in the 13th minute, they quickly squandered another terrible opportunity.

After Luka Modric’s poorly executed free-kick in the 40th minute, Japan’s Ito received a counter pass and got the ball across to Kamada, who then blasted over the crossbar.

However, the Samurai’s persistence paid off three minutes before the break as they got in front from Maeda’s finish to a flicking header from Yoshida.

Maeda’s debut goal in the World Cup then means Japan will be scoring ahead of their opponents for the first time. All their goals have always been after they have conceded.

Japan continued to show a brighter mode in the second half, with Ito and Kamada threatening the Croatian defence.

But, 10 minutes into the second half, Croatia equalised with Ivan Perisic’s header to Dejan Lovren’s low cross to a bottom corner.

Luka Modric finding a possible winner for the Blazers half-volleyed a shot that was saved by Gondo in the 63rd minute.

The Croatians then continued to show class with 20 minutes left until the stoppage time. Ivan Perisic, having gotten an equaliser for the Blazer, attempted for a second from a loose ball but was deflected by Tomiyasu to a corner in the 77th minute. Two minutes later, Asano then blocked the resultant corner kick from Barisic.

After so much wasted effort, both proceeded into extra -time which still failed to produce any goal as the scoreline remained 1-1.

The Croatians have often had their way in World Cup penalty shootouts and they did that again in the first shootout of 2022.

The Blazers put their nose in front after Takumi Minamino’s penalty was saved by Livakovic while Vlasic put Croatia in front.

The Samurai did suffer the same fate after Mitoma’s attempt was saved by Livakovic and Brozovic, who scored against Russia scored again.

Takumi Asano then scored for Japan to give his team a lifeline, with Marko Livaja failing to score for Croatia afterwards

But Japan’s slim hopes were extinguished after Livakovic completed his hat-trick penalty saves with Maya Yoshida’s attempt and Mario Pasalic then sealed the win for the Blazers.