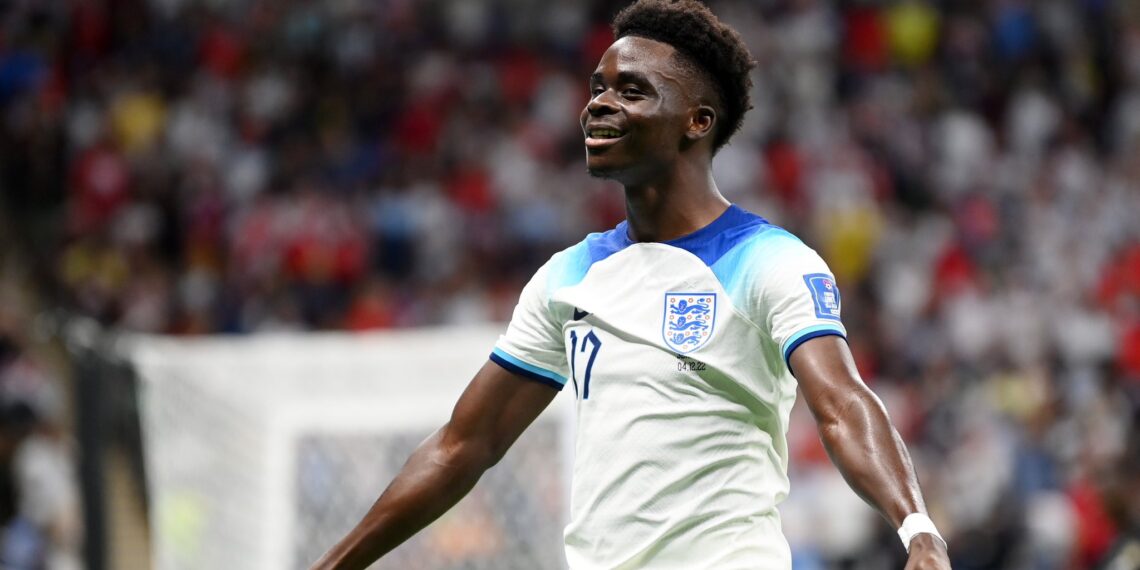 Bukayoko Saka celebrates goal for England vs Senegal at the 2022 World Cup in Qatar [PHOTO: @BukayoSaka87]

Saka ensured England’s victory was all but sealed when he made it 3-0 in the 57th minute before he was substituted moments after.

England are through to the quarter-final stage of the ongoing World Cup in Qatar and they did it in a stunning style, hammering Senegal’s Teranga Lions 3-0 Sunday night at the Al Bayt Stadium.

While many had thought the reigning African champions will give the Three Lions a run for their money and some even predicted an upset, Gareth Southgate’s men showed they meant business with an emphatic victory.

After surviving the early threats from Senegal, England got in front in the 38th minute through an unlikely source in Jordan Henderson before Harry Kane doubled the advantage with the last kick of the first half.

Bukayo Saka ensured that England’s victory was all but sealed when he made it 3-0 in the 57th minute before he was substituted moments after.

Both England and Senegal won two games apiece in the group stage going into Sunday’s Round of 16 ties.

The game against Senegal was the eighth time England will be facing an African team in the World Cup and they have been unbeaten in all the previous ties, meaning the onus was on the Teranga Lions to rewrite history.

Indeed, the African champions started brightly, with pockets of chances here and there.

They came really close to taking the lead just after the half-hour mark, but they were denied by fantastic goalkeeping by Jordan Pickford, who stopped a goal-bound effort by Boulaye Dia.

After the early danger signs, the first goal did arrive, but it wasn’t for Senegal as England got in front with their first dangerous attack of the game.

With a perfect cutback pass, Jude Bellingham found Henderson in the box and the Liverpool man calmly slotted past Edouard Mendy in goal for Senegal.

Kane was at his deadly best to add a second with the final kick of the first half after Bellingham again initiated a brilliant move as he found Phil Foden on the left flank.

Foden squared the ball to Kane, who made no mistake when one vs one with Mendy.

With a two-goal lead going into the break, England came out more confident in the second half.

In the 57th minute, Saka made it 3-0 following some excellent wing play from Foden, who registered his second assist of the evening.

Though there was over half an hour more of action after the third goal, the game ended 3-0 as England maintained a firm grip on their lead.

Having negotiated their way past Senegal, England are in for a tougher contest in the quarter-final where they will face France on Saturday evening at the same stadium.

The role of the church in national transformation, By Sunday Adelaja

Southwestern Derby: We will play with our head -Coach Ogunmodede