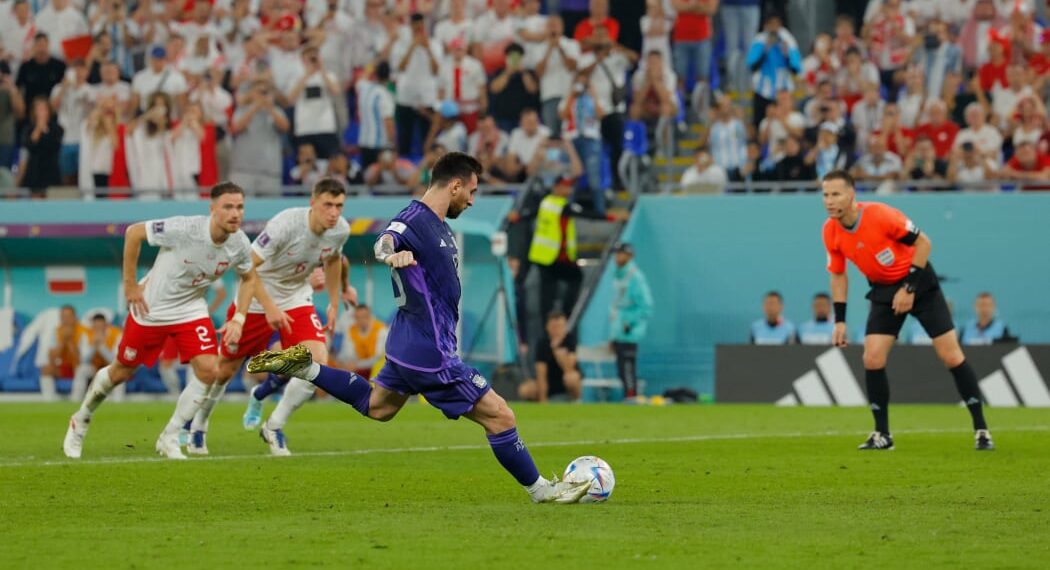 Messi missed a penalty in the first half but MacAllister and Alvarez scored in the second half to ensure Argentina finished as Group C leaders.

A missed penalty from Lionel Messi in the first half did not matter as Alexis MacAllister and Julian Alvarez scored in the second half to give Argentina the three points and leadership of the group.

Poland, who began the day as Group C leaders, were almost dumped out, but they squeaked through on the FIFA Fair Play rule as they had fewer cautions than third-placed Mexico, who beat Saudi Arabia 2-1.

It was all Argentina in the opening 20 minutes of the game as Lionel Messi and his teammates pushed Poland back into their half. They got the first corner in the second minute as they chased an early goal to calm down the tension.

Messi had the first shot on target in the seventh minute, but it did not trouble Wojciech Szczesny, in goal for the Polish team. In the 10th minute, Messi got another shot on target from a tight angle, which Szczesny needed to save for a corner. Marcos Acuna was the next Argentine to flash another effort towards goal, but on his weaker right foot, the effort was high and wide.

Acuna flashed another shot just wide in the 29th minute as Argentina continued to exert pressure on the Poland defence. It looked just a matter of time before they cracked. Szczesny needed to be alert and on his toes to tip over Angel di Maria’s corner in the 32nd minute.

Julian Alvarez sent another effort towards goal in the 36th minute, which was saved, but the Manchester City forward was first to the rebound and sent a cross towards Messi at the far post. Szczesny flew out of his post and was adjudged to have grazed Messi’s forehead. VAR intervened and sent Dutch referee Danny Makkelie to the monitor, and he concluded it was a penalty. That was fortuitous.

Jamie Carragher wrote on Twitter, “That is a joke, that is never a penalty! Embarrassing VAR.” Before the kick, Szczesny was seen patting his captain Robert Lewandowski, and he stood tall to save with a strong right hand, denying Messi his second goal at the 2022 World Cup. It was the Juventus’ goalkeeper’s second penalty save in Qatar, after his stop against Saudi Arabia in the second group stage.

Alvarez had another strike at goal in the 43rd minute, which Szczesny inadvertently punched towards Rodrigo De Paul, but the Atletico Madrid player was not quick in adjusting to direct the rebound away from the Poland goalkeeper, who gathered comfortably.

Argentina had eight shots on target in the first half, while Poland had none. They also had 69 per cent of the ball, and seven corner kicks. Poland made two changes at the beginning of the second half; Michal Skoras and Jakub Kaminski came on for Przemyslaw Frankowski and Karol Swiderski. Argentina took the lead immediately as Alexis MacAllister’s scuffed effort found a way past the brilliant Szczesny. That took just 68 seconds after the restart.

Acuna was shown the first yellow card of the match after the left back caught Skoras. De Paul went in hard on Bartosz Bereszynski, but the referee only blew for a free kick. Argentina scored a second goal after a neat interplay between Enzo Jeremias Fernandez and Alvarez, who took a touch before finding the corner-no chance for Szczesny.

Messi was again denied by Szczesny in the 71st minute and a minute later, Messi sent Alvarez through, but he only found the side netting. Poland ended the game without a shot on target but will fancy their chances in their second round clash against France while Argentina face surprise qualifiers Australia.