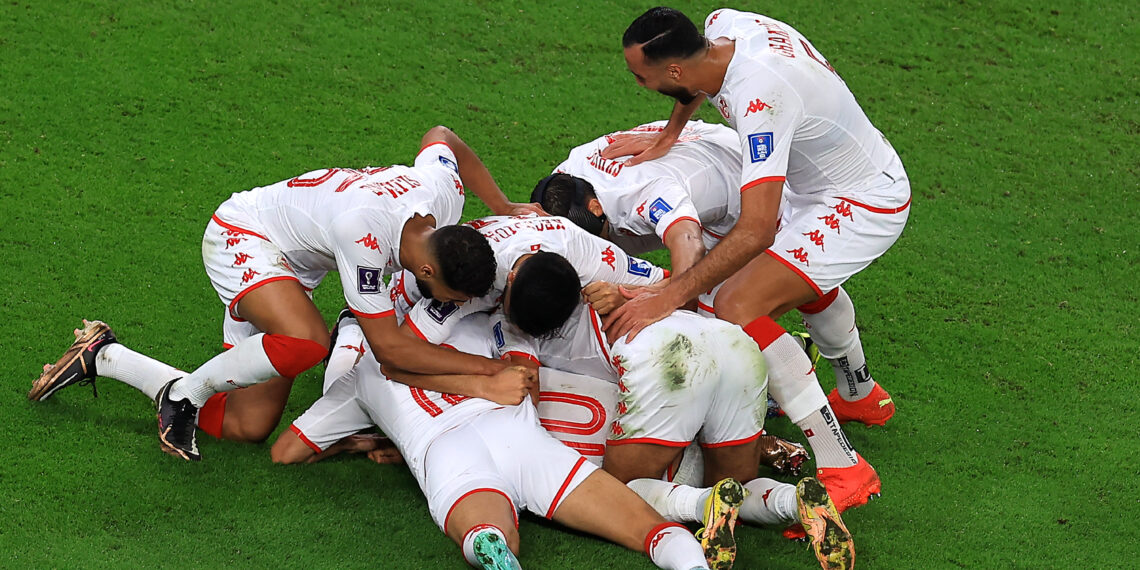 Tunisia’s Carthage Eagles are out of the 2022 World Cup in Qatar even though they did well enough to beat France 1-0 in their final group game on Wednesday at the Education City Stadium.

Unfortunately, the famous victory over the defending champions wasn’t enough to keep the Carthage Eagles as Australia snatched Group D’s other ticket with their gritty lone-goal victory over Denmark.

Despite their ouster, the coach Jalel Kadri-led boys will be proud they gave it their all even though it wasn’t enough.

Wahid Khadri, who had been involved in over three goals for the Eagles, scored the only goal to help Tunisia defeat France for the first time.

Going into the final group game, Tunisia’s coach, Jalel Kadri made six changes in the attacking role as they sought their historical knockout berth.

Meanwhile, France who have sealed the knockout ticket under Coach Didier Deschamp paraded new legs including Goalkeeper Steve Madanda who took the place of Hugo Lloris in the starting line up.

The first 10 minutes of the game saw the Tunisians get what they thought was their first goal in the World Cup from Nander Ghandri tap-in but the assistant referee was quick to disallow the goal for offside.

Having suffered an eighth-minute disallowed goal, the Carthage Eagles sought an opener in the 17th minute with Anis Slimane going past Raphael Varane sent a decisive pass to Mohammed Romdhane who latched the ball sideways.

Youssouf Fofana’s pass was poorly handled by Kingsley Coman with the winger playing an off-target shot in the 25th minute.

Tunisia again failed to break the deadlock in the 42nd minute after Khazri’s attempt was ruled offside.

The first half, however, ended in a barren draw with Tunisia having enjoyed the better chunk of the chances.

After 13 minutes in the second half, Khadri broke the deadlock in a spectacular way, with Laidouni picking a loose ball from Fofana; sending it to the skipper, who drove from the midfield stretching his ball past Axel Disasi and Mandanda.

The goal eventually became the Eagles’ first goal after four hours of play at the World Cup.

However, three minutes after the hour mark, Didier Deschamps sent in three players, William Saliba, Andre Rabiot and Mbappe for damage control to what Khadri caused to the Blues.

But efforts from the defending Champions to find an equaliser faced a hunchback.

However, the game in the last eight minutes was a defence against an all-attacking France team.

The claws from the Eagles almost fell off in the last minute after substitute Antoine Griezmann’s goal was chalked off by the VAR.

Though the Eagles have been eliminated, they will keep their heads high with a first-time victory over France.

Denmark have been eliminated just like Tunisia after a lone-goal defeat to Australia.

Mathew Leckie scored at the hour mark with a solo effort from Ryan McGree’s pass to send the Australian to the knockout stage for the first time since 2006.