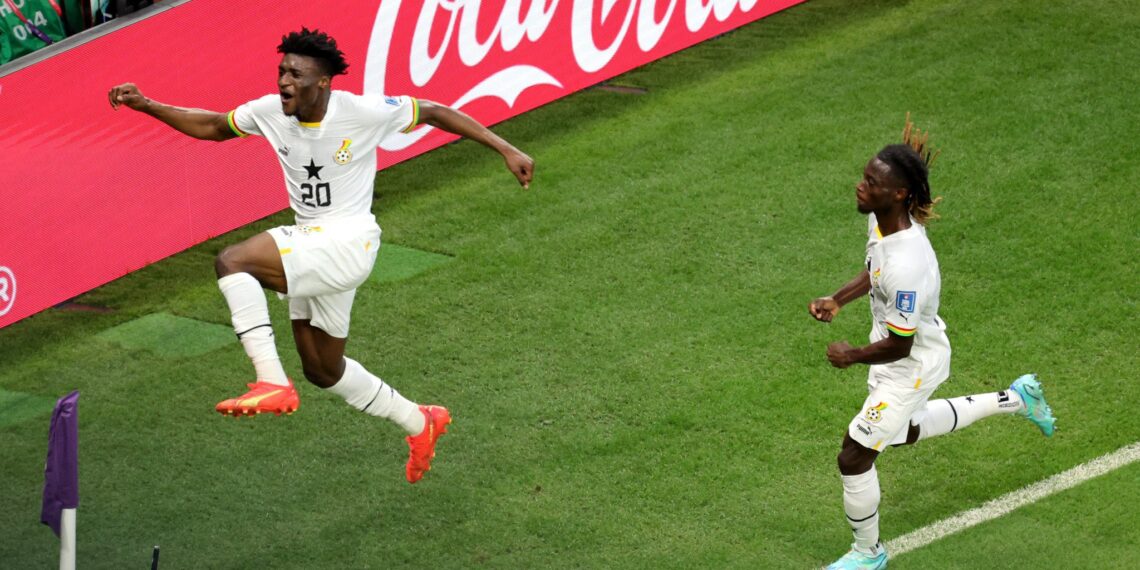 Black Stars of Ghana celebrate after scoring against South Korea at the 2022 World Cup in Qatar [PHOTO: TW

Ghana’s Black Stars on Monday played out another five-goal thriller in their second group game at the ongoing World Cup in Qatar.

But unlike their first game in which they were left broken-hearted losing 3-2 to Portugal, the Ghanaians held on, this time beating Korea by the same margin in a game that had many records set and broken.

Just like Cameroon, Monday’s outing was the first time, the Black Stars will score three goals in a World Cup match and it was enough to give them their first victory in Qatar and first competitive win over the Taeguk Warriors.

The game which saw South Korea’s Coach, Paulo Bento sent off by Anthony Taylor was as dramatic as the earlier game involving the Indomitable Lions.

The Black Stars scored two quick-fire goals in the first half from Mohammed Salisu and Mohammed Kudus. But the two goals were cancelled by Korea’s Cho Gue-Sung’s brace from a header in the second half.

However, Ghana bounced back with Kudus getting the winning goal and goalkeeper, Ati Zigi doing enough to deny the Koreans from getting a share of the spoils.

South Korea had a slight edge going into Monday’s Group H tie at the Education Stadium, having secured a point in their first game against Uruguay.

But for Ghana, they were at risk of an early elimination from the Group after their 3-2 defeat to Portugal.

Both teams made three changes to the line-up that played the opener last Thursday.

For Coach Addo, he started with a back four unlike the five he used in his previous game where captain Ayew, Mensah and Lamptey started ahead of Seidu, Djiku and Baba Rahman.

With so much on the line, especially for Ghana, South Korea were the ones controlling the game in the first 20 minutes.

But the Black Stars did show resilience in the 24th minute when Jordan Ayew’s cross exposed the clumsiness of the Korean defence for Mohammed Salisu to whizz the ball into the net.

After the VAR check, the goal stood, and the Koreans conceded their first goal in the World Cup.

The goal then put Ghana in a comfortable state and it wasn’t long before they doubled the lead from Mohammed Kudus’ header to Jordan Ayew’s cross in the 34th minute.

Thomas Partey almost made it three from another Jordan Ayew’s cross from the corner but Korea’s Seung-gyu hit the ball above the goalpost at the cusp of the halftime.

Ghana move into second place in Group H after a remarkable 3-2 win over South Korea 👏 pic.twitter.com/XiBcb72MvC

Less than three minutes from the first goal, Cho completed his brace with another header to Kim Jin-Su’s cross to put the Koreans levelled with Ghana. Meanwhile, Cho’s brace became the first time Korea will be scoring with headers in the World Cup after 35 games.

However, the Koreans’ joy didn’t last after Kudus set another milestone for the Black Stars who have never scored three goals in a World Cup game after slotting home Inaki Williams’ deflected pass in the 70th minute.

A minute later, Ghana’s Ati-Zigi parried Lee’s goal-bound freekick to the corner. Six minutes before stoppage time, Son Heung-min failed to get an equaliser after the captain missed the ball that went to Kim Jin-Su who blasted over the bar.

In the 90th minute, Son’s shot was blocked and Thomas Partey blocked the second attempt from Su.

Meanwhile, the 10 additional minutes saw Korea’s Cho putting some pressure on Ghana for an equaliser. But the Black Stars had their goalkeeper to thank for the saves.

After Anthony Taylor had blown the whistle, Coach Paulo Bento was shown a red card refusing to leave the pitch.

The Black Stars now have a date with old foe, Uruguay in their final group game while Portugal will seek to settle scores with 2002 enemy, South Korea.