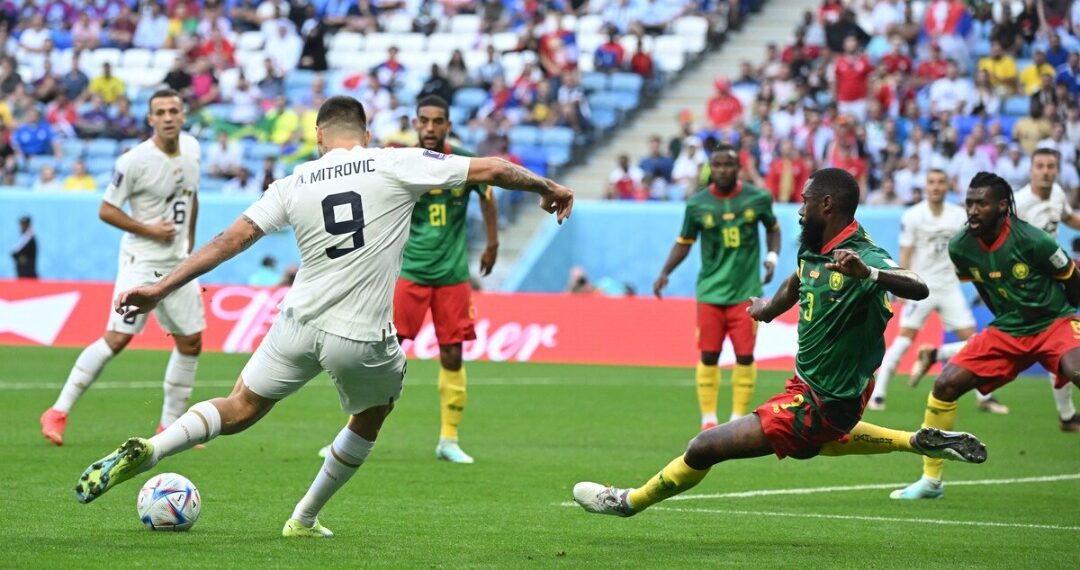 Cameroon and Serbia at the 2022 World Cup

This is the first time Cameroon will be scoring three goals in a World Cup game.

The Indomitable Lions of Cameroon are still hanging on to their slim hopes of qualifying for the knockout stage of the World Cup.

On Monday, the Lions had to dig deep to force Serbia to a 3-3 draw in their second group game at the World Cup in Qatar.

While Cameroon would have hoped for a better result in Monday’s outing, they would be happy having halted their eight-match losing streak at the World Cup.

They would also be glad to have done enough to stay in contention for a place in Round 16 going into their final group game against Brazil.

Cameroon scored first from Jean-Charles Castelleto tap-in before Serbia finished the first half with two quick-fire goals from Strahinja Pavlovic and Sergej Milinkovic-Savic.

The second half, however, changed after super substitute, Vincent Aboubakar scored the second goal and assisted Eric Choupo-Moting for the third within two minutes after they had conceded Aleksanda Mitrovic’s goal early into the second half.

Both sides, having suffered defeat in their opening matches, began well to avoid elimination before the final group match.

Serbia players were the first to show class in the crucial battle within the first 10 minutes of the game.

Aleksandar Mitrovic, who has been impressive for his English club, Fulham gave the Indomitable Lions a breath-taking moment after his curling shot hit the crossbar.

Seven minutes later, Mitrovic picked up a loose ball from the Cameronian defender, Nouhou Tolo and latched the close-range ball that went sideways.

However, Pierre Kunde gave the Lions their first shot on target after Vanjay Milnkovic-Savic parried the midfielder’s shot to a corner in the 19th minute.

Kunde would have made it two for the Lions but the winger’s effort was saved by Savic in the 43rd minute.

But the Serbians completed a two-goal comeback on the cusp of halftime with Strahinja Pavlovic scoring a header to Dusan Tadic’s free-kick. Afterwards, Serjey Milinkovic-Savic put the Eagles in front with a long-range shot that cut through a Cameroonian defender and Devis Epassy.

The Serbs kept their first-half pace going in the second half of the game.

Eight minutes into the second half, Mitrovic, who had been trying to get his first goal in the World Cup, tap-in Zilokovic’s pass for Serbia’s third goal.

But the Rigobert Song-led men roared into the game after the addition of Aboubakar for Martin Hongla in the 56th minute.

The striker didn’t wait too long before putting Cameroon into the game five minutes later after looping past Milikovic-Savic after receiving a counter pass from Castello. He further assisted Eric Choupo-Moting for the third goal. The game then became the first time Cameroon scored three goals in a single World Cup game.

Cameroon will be hoping to grab a knock-out ticket when they play Brazil while Serbia will face Switzerland for a chance to change their World Cup status.

ANALYSIS: How feasible are CAN’s 11-point demands to Tinubu, others?