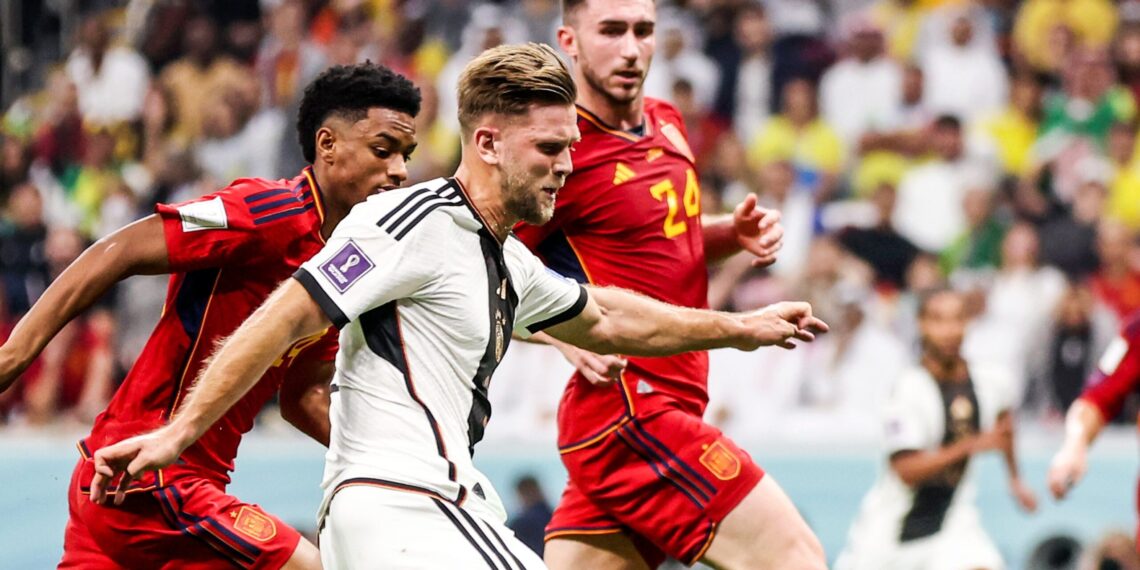 Two second half goals from Spain and Germany means Group E will be settled on matchday three. Alvaro Morata came off the bench to score his second goal in Qatar while Germany substitute Niclas Fullkrug scored his first-ever goal for his country to salvage a much-needed draw.

Both teams changed the teams that started their first matches. Spain replaced right back Cesar Azpilicueta with Dani Carvajal while Hansi Flick dropped Kai Havertz and Nico Schlotterbeck in favour of Leon Goretzka and Thilo Kehrer.

With so much on the line, especially for Germany, it was Spain that started the better of the two teams and, in the seventh minute, Dani Olmo tested Manuel Neuer’s alertness. Iit took a fingertip to divert Olmo’s rocket against the crossbar.

Three minutes later Goretzka raced up the pitch after a delightful flick from Ilkay Gundogan, but the Bayern midfielder delayed his pass so much that Serge Gnabry ran offside. He should have released his club teammate much faster. Jordi Alba drove a shot goal-ward but wide as the midfield battle got fiercer.

Kehrer got the night’s first booking in the 37th minute when he tripped Ferran Torres from behind midway into the German half. Germany then thought they had the opener through Antonio Rudiger’s downward header in the 40th minute, but VAR overruled for offside.

Sergio Busquets tripped Jamal Musiala to go into the book in the 44th minute. The first half saw Pedri touch the ball 38 times while Pedri had fewer with 11 as both Joshua Kimmich and Goretzka were always on close watch.

The second half started as the first ended. Luis Enrique was the first to twitch as he sent on Alvaro Morata for Torres, as the Spain manager needed a more direct No.9 to bring Spain up the pitch. Spain goalkeeper Unai Simon turned over the ball to give Germany a goal scoring which he parried for a corner.

The referee showed Goretzka a yellow card for a professional foul on Marco Asensio in the 57th minute and Olmo tried another long range effort, which was well gathered by Neuer that time. Kimmich followed Goretzka into the book on the hour for a stamp on Olmo.

Thereafter, Morata ghosted past Niklas Sule to flick Alba’s cross over Neuer for the opener in the 61st minute. Spain opened up Germany with a sweeping counter in the 65th minute, but Asensio, with the goal at his mercy, blasted over from just inside the box. Nico Williams and Koke came on for Asensio and Gavi in the 65th minute as Enrique tweaked his team for the counter.

In the 70th minute, Flick sent on Niclas Fullkrug, Lukas Klostermann and the fit-again Leroy Sane for Gundogan, Muller, and Kehrer. Simon denied Jamal Musiala at point-blank range in the 72nd minute as Germany pressed for a life-saving equaliser.

Fullkrug slammed home Germany’s equaliser in the 83rd minute as he stole in front of Musiala and blasted his first Germany goal past Simon. This was only the 29-year-old’s third cap for his country after a good season with Werder Bremen, for whom he has scored 10 goals in 14 Bundesliga appearances.

Six minutes were added on and Sane almost won it in the 94th minute when he went around Simon, but he could not complete the job. Germany stay alive with just the point and they will hope Spain do them a favour against Japan on Thursday while they do the business against Costa Rica.

Men and nations are great by the wealth of their virtue, not the virtue of their wealth (2), By Sunday Adelaja