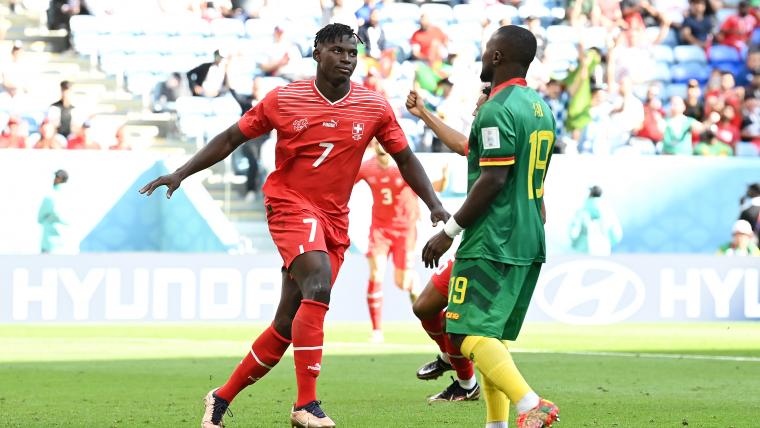 Breel Embolo was the hero for Switzerland as they got off to a winning start at the Qatar 2022 World Cup on Thursday.

Though born in Cameroon, the 25-year-old has since switched allegiance to the Swiss team and he scored the only goal that condemned the Indomitable Lions to a 1-0 defeat at the Al Janoub stadium.

While scoring one’s first-ever World Cup goal is often greeted with wild celebration, Embolo bottled his emotions not to jubilate the downfall of his country of birth.

Indeed, the Lions would have themselves to blame for the disappointing start in Qatar, having dominated the early exchanges and also creating better chances, especially in the first half.

Despite edging the ball possession 51 per cent to 49 per cent and also mustering five shots on target compared to Switzerland’s three, Rigobert Song’s men ended as losers as they become the second African team to be condemned to a defeat at the ongoing World Cup.

Eric Maxim Choupo-Moting, who was in superb form for Bayern Munich in the build-up to the World Cup, had the first chance to put Cameroon in front.

The 33-year-old tested Switzerland’s number one Yann Sommer in the 14th minute, but his attempt wasn’t as precise as it should be.

With Switzerland unable to convert early possession dominance into clear-cut opportunities, Cameroon looked the more likely to break the deadlock during their forays forward.

For all of Cameroon’s pressure in the first half, Switzerland had the ball in the net just three minutes after the restart.

Xherdan Shaqiri proved his quality once more; picking out an unmarked Embolo inside the penalty area, and the Monaco man fired home from a few yards out.

That goal proved to be the decider, as both teams failed to convert any of the other chances that came their way afterwards.

This latest defeat for Cameroon marked their eighth consecutive loss at the World Cup finals, with Mexico being the only team to have suffered more (nine defeats) between 1930 and 1958.

With their winning start, Switzerland now sit at the top of Group G before Serbia take on Brazil later today.

The Swiss will be up against Brazil in their next group game on Monday while Cameroon have a must-win clash in their hands against Serbia, same day.