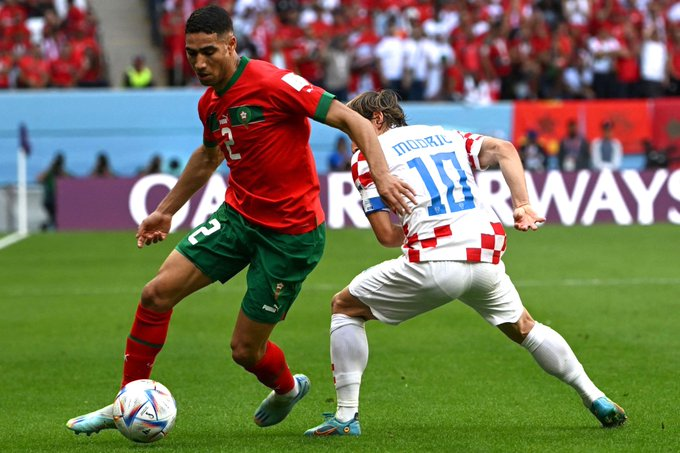 Africa’s search for her first victory at the ongoing FIFA World Cup in Qatar continued on Wednesday as the Atlas Lions of Morocco could only force Croatia to a barren draw in their Group F opener at the Al Bayt Stadium.

Both Croatia and Morocco are featuring in their sixth World Cups even though the Croats are more successful, having made it all the way to the final at the last Mundial in Russia.

This perhaps explains why Croatia were the favourite to beat the Moroccans in Wednesday’s Group F opener but hard as they tried, they were unable to tame the Atlas Lions, who played compactly in the defence

Croatia came all out from the blast of the whistle as Ivan Perisic mounted pressure following an overlapping pass from Borna Sosa in the second minute before Nayef Agueh cleared off the advancing threat.

Two minutes later, Perisic and Andrej Kramaric failed to go past Romain Saiss who toed out the ball.

Perisic would have put the Blazzers in front but the Tottenham player was quite slow to maximise a loose ball from Selim Amallah as he played it off the crossbar in the 17th minute.

Towards the end of the first half, Croatian skipper and Real Madrid midfielder, Luka Modric, could have done better by converting a rebound from Bono’s pullout that was latched over the post.

The first half ended with the Lions showing composure, while Croatia failed to utilise their chances.

Barely 10 minutes into the second half, Morrocan’s goalkeeper stretched out to deny Modric’s corner from getting to Gvardiol Josko.

The Moroccans, however, suffered a blow after Noussir Mazrouni was stretched off the pitch following his earlier header near the post that was halted by Croatian defender, Josip Juranovic.

He was then replaced by Yahya Attia Allah, who plays club football for CAF Champions League winners, Wydad Casablanca in Morocco.

Four minutes after the hour mark, Croatia goalkeeper, Dominik Livakovic was quick to punch out Archaf Hakimi’s strike after Ziyech had set the PSG player up from a free-kick.

10 minutes to the end of the stoppage time, Modric’s free kick failed to hit the expected target as Gvadiol’s header went sideways.

After several wasted chances from Croatia and Morocco, both sides ended in a barren draw-the second in the competition.

Though Morocco will be happy with the point earned on Wednesday, they will be keen to improve their performance at the Mundial having only won just one game in their last 10 World Cup matches.

The ugly side to the beautiful game, By Ayo Ambrose Alli