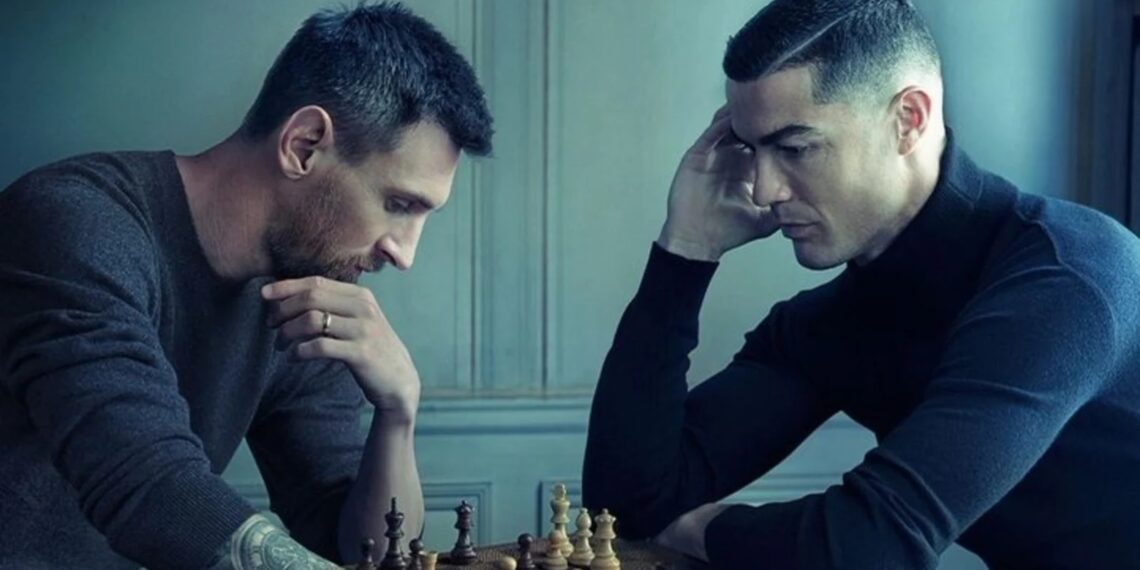 Ronaldo and Messi are each responsible for four of the top 20 most-liked Instagram posts of all time.

On Sunday, two of the world’s best football players, Cristiano Ronaldo and Lionel Messi, broke the internet when they posted pictures no one expected to see, especially their fans.

According to Front Office Sports, the iconic photo that shows the pair of all-time great soccer players playing chess against one another has garnered over 38 million likes. Making it the second-most-liked Instagram post of all time.

Both players shared the iconic picture on the day the 2022 World Cup started as part of a paid partnership with Louis Vuitton. The world-famous American portrait photographer, Annie Leibovitz, best known for her engaging portraits, particularly of celebrities, shot it.

With the new campaign by Louis Vuitton, Ronaldo and Messi are each responsible for four of the top 20 most-liked Instagram posts of all time.

Battle of the GOATs

While the two players battle on the field in their respective matches, the battle of the GOATs (Greatest of all time) is one created by their fans who argue daily about who is the better of the pair between the Portuguese and the Argentine.

The argument revolves around skills, statistics and even social media followings.

According to Nielsen, a data hub, the average media value of a branded social post from Ronaldo is worth $2.79 million. In comparison, one from Messi is worth $1.95 million, the highest figure for any soccer player in the world.

Despite the large numbers the stars carry, they still have yet to get close to the most-liked Instagram post of all time, which belongs to a picture of an egg that has captured 55.9 million likes since January 2019.

Enthusiastic fans of the football players jumped on their keyboards to share opinions on the picture. While some clamoured for the image to be the most outstanding picture of all time, others claimed it was Photoshopped, while others noticed minute details.

From the behind-the-scenes video released by LV (Louis Vuitton), many fans speculate the famed picture is photoshopped; in the video, Messi and Ronaldo do not appear in the same frame together.

Behind the scenes of the Ronaldo and Messi Louis Vuitton picture advrrt.pic.twitter.com/nv4ErtRmSR

Also, many chess lovers pointed out that an exciting feature of the picture is the positioning of the chess pieces.

So the Louis Vuitton photoshoot with Messi/Ronaldo features a game between Magnus and Hikaru from 2017. But… why specifically that one? pic.twitter.com/ETRWaawtra

Chess enthusiasts pointed out on Twitter that the placements of chess pieces in the picture mimic the arrangements of a popular game between chess grandmasters Magnus Carlsen and Hikaru Nakamura from 2017, which ended in a draw.

Some fans also noticed the Louis Vuitton trunk used to hold the chessboard was the same one used to present the FIFA World Cup trophy in 2018.

Nigerians refused to be left out of the picture analysis as a user claimed that the football legend’s concept was a recreation of the Wizkid and Burna boy scene of playing an Ayo game in the music video scene from Balon D’or.

Can't believe Ronaldo and Messi recreated this pic of Burna and WizKid. pic.twitter.com/KzMP9p7rb4