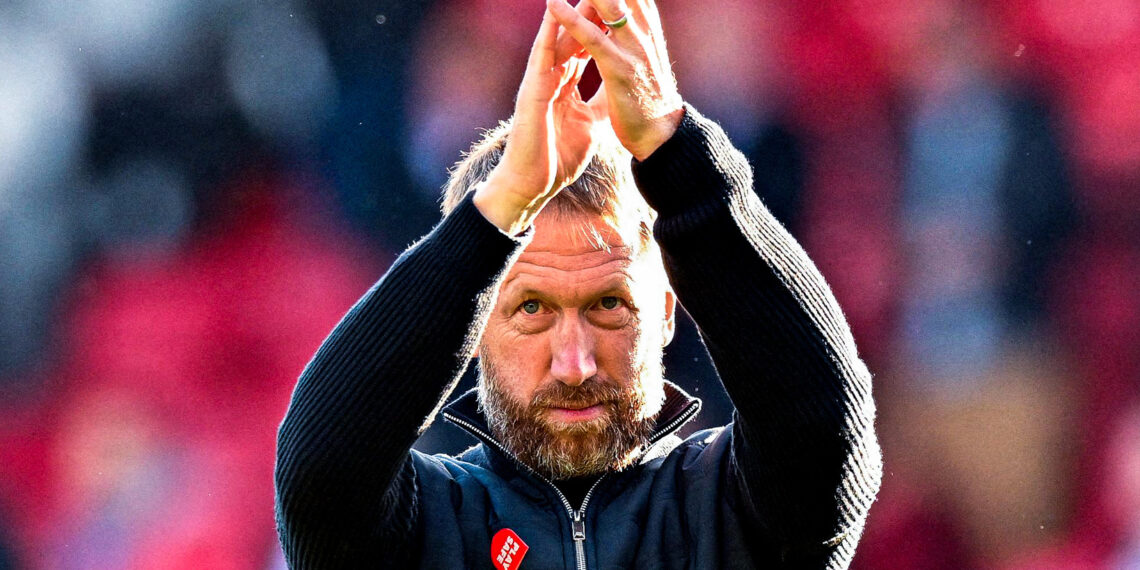 Aubameyang and Gallagher scored their first Chelsea goals in a comeback win over Palace.

Graham Potter’s Chelsea fought hard to earn a 2-1 comeback victory over Crystal Palace at Selhurst Park in a London derby on Saturday.

It was a league debut for Potter as Chelsea manager and his team got goals from Pierre-Emerick Aubameyang and Conor Gallagher-their respective firsts for the Blues. However, Palace had themselves to blame after they couldn’t keep their early lead from Odsonne Edouard.

Unlike former Chelsea gaffer, Thomas Tuchel, Potter utilised the 4-3-3 formation with Pierre-Emerick Aubameyang, on his league debut for Chelsea, flanked by Raheem Sterling and Kai Havertz.

Palace, who have only suffered a defeat in their last nine home games, took an early lead from Edouard from a Jordan Ayew cross in the seventh minute.

Three minutes later, Kepa Arrizabalaga had to deal with Wilfred Zaha for a second goal after the Ivorian’s shot was parried for a corner. The corner eventually went wide from Eberechi Eze’s strike.

Chelsea went close for an equaliser through Mason Mount’s header in the 19th minute. In the 23rd minute, Raheem Sterling’s chance for a leveller from Reece James’ through ball went off the post.

Chelsea could have been reduced to 10 men following a handball attempt from Thiago Silva as he denied Jordan Ayew, who stole the ball from the Brazilian a free run on the Chelsea goal in the 33rd minute. But VAR review confirmed referee Chris Kavanagh’s earlier yellow card call on the defender.

Five minutes later, Silva’s header assisted Aubameyang, who turned and fired past Vicente Guaita with a sublime strike for his debut goal for the Blues.

A chance for Chelsea to secure a lead before halftime after a pressurised Tom Watkins sent a back pass to Guaita, who was forced to gather the ball and was penalised with an indirect free kick. Mount’s shot grazed the outside of the right post.

Chelsea eventually secured the lead with the help of their substitutes, Christian Pulisic who provided an assist for Conor Gallagher in the 90th minute.

Elsewhere, Liverpool continued stuttering as they shared the points with Brighton and Hove Albion in a hard-fought 3-3 draw at Anfield.

Leandro Trossard scored a hat-trick for Brighton while Roberto Firmino’s brace and an own goal from Adam Webster ensured Jurgen Klopp‘s continue lagging the league’s pacesetters.

Brighton opened the long goal-scoring through from Leandro Trossard in the fourth minute from Trent Alexander-Arnold’s mistake. The English defender was also at fault for the second goal in the 17th minute after Caicedo’s pass went past Trossard, who fired Alison Becker.

Before the break, Liverpool halved the lead after Mohamed Salah assisted Firmino. The goal later stood after a VAR scrutiny.

Liverpool showed some class as they avoided defeat at their Anfield home with Firmino scoring an equaliser in the 54th minute. Liverpool later added the third with a Webster own goal in the 63rd minute.

The shaky performance of the Reds showcased seven minutes to stoppage time when Karou Mitoma’s unaltered cross reached Trossard who completed his hat trick with a strike over Allison.

Just like at Anfield, Bournemouth and Brentford shared the points at the Vitality Stadium.