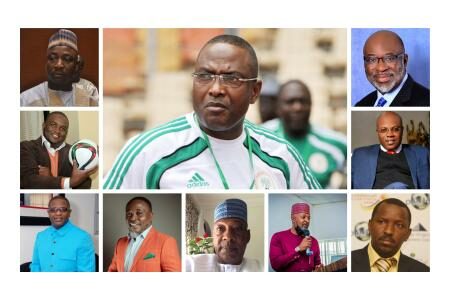 On Friday, the Nigeria Football Federation will elect a new president to replace Amaju Pinnick, who has led the federation for the past eight years

The Nigeria Football Federation (NFF) will elect its 40th president at its 78th Annual General Assembly in Benin-City, Edo State on Friday(today).

Whoever emerges as the new NFF President will, however, be the 36th substantive president since the association was founded in 1945,

There are ten men in the race to replace the outgoing NFF board led by Amaju Pinnick.

Idah, 47, is the pastor in charge of Christ Ambassadors Church in Johannesburg, South Africa.

He became a pundit for the South African-based SuperSports channel after retiring from football and he has stated on many occasions since throwing his hat in the ring that an NFF body led by him will return to the grassroots. He believes the key to a great national team is to enable local players to compete on an equal footing with foreign-based players.

Despite never having worked professionally in any football organisation, Idah believes he has what it takes to lead the NFF to greater heights.

Emeruwa is a doctorate holder in Health Education and Human Kinetics from the University of Ibadan and is CAF’s Head of Safety and Security in Cairo.

He did not play professional football but has spent over a decade in sports administration.

He is a member of the pioneer class, as well as the first African to be a Certified Sports Safety and Security Professional from the SRH Heidelberg University in Germany in a course facilitated by the International Centre for Sport Security (ICSS) Doha, Qatar.

Emeruwa’s wealth of experience cuts across the NFF for over a decade where he served as a special assistant to three successive Nigeria Football Federation’s general secretaries- Bolaji Ojo-Oba, Musa Ahmadu, and Mohammed Sanusi. He also worked as a coordinator for safety and security matters for CAF and FIFA-related games.

As for the CAF Head of Security and Safety, he emphasised creating an “internal economy of football within Nigeria.” He also expressed that he would focus on restoring confidence to the leadership of the Federation if elected as President. “My immediate task as NFF president will be to restore confidence in the federation’s leadership”.

Doherty is a new name to many football observers in Nigeria. He is a former player.

Doherty played for Concord FC and Water Corporation before a career-ending ankle injury at the camp of the Flying Eaglets ahead of the 1999 U-20 World Cup during the preparatory game for the team stopped his progress.

While he might not have had a great playing career, he has made a name for himself as one of Nigeria’s best-known football administrators and consultants based abroad.

He’s the founder of Team Nigeria UK which just partnered with the EPL club side Southampton recently.

Known to be an activist and a social media savvy personality, Doherty wants to bring the needed change to the Federation if elected as the President and to engender self-sufficiency.

Gusau is a CAF committee member and the Zamfara FA Chairman. He isn’t an ex-international but has been involved in administering football in his state and Nigeria. He is on the current NFF board as the Chairman of all states’ FA Chairmen.

Gusau believes the NFF needs fresh breath and blood at the helm of affairs. He boasts of uplifting the national teams with proper talent discovery. “My plan once elected is to see that the Nigerian Football League is developed and attractive to sponsors.”

“I will also ensure that talents are discovered and are brought to the limelight for the growth and development of football in Nigeria.”

Akinwumi is a lawyer and football administrator who once served on the ad hoc committee for restructuring the Nigeria National League in 2012.

He is the first Vice President of the NFF.

Akinwumi was first elected into office in 2014 and was re-elected in 2018. He also serves as the Chairman of the Lagos State Football Association.

His vast knowledge of football administration in the country has made him one of the leading candidates likely to replace Amaju Pinnick as the President of the Nigeria Football Federation.

Akinwumi, 54, highlighted four points by which he would work to drive football forward in the country.

“I desire to achieve my ambition in NFF on four pillars. The first is football development, which includes grassroots restructuring and the development of the league.

“Second is the business of football, such as investments that can yield return. We also need partners and sponsorships, which is the icing on the cake and not the cake itself.

“Third, infrastructure, we need to encourage people to invest in the league by building small stadiums, which they can improve upon, and also in a housing scheme.

“Fourth is the use of technology for match tickets, to identify the hooligans from the genuine fans.”

Dikko was born in Kaduna. He is the Chairman of the League Management Company ( LMC), which is the body saddled with the responsibility of organising the top flight division in the country, the NPFL.

He previously worked as a sports committee consultant for the Nigerian House of Representatives. In 2004, he was also the manager of the FIFA Goal Project, and he was accredited for several club tours, including the match between Premier League giants Manchester United and English outfit Portsmouth FC in 2008, alongside Kano Pillars.

Shehu’s involvement with football administration dates back to 1991, and he believes that football in Nigeria is more than words can describe.

Yola is the Chief of Staff to the Minister of Sports, Sunday Dare, and is contesting for the NFF top seat for the second time, having lost out to Amaju Pinnick in 2018. In administration, Yola has spent over 40 years overseeing different sports.

He began his career in administration as secretary of the Kano State Amateur Basketball Association. He layer became the Head of Zonal Sports Offices. He was also a committee member in charge of two National Sports Festivals that were held in Rivers and Lagos States

Yola was the Chairman of Kano Pillars from 2010 to 2014, during which the team won three league titles. He claims that the reason for his participation is the state of the football body.

He believes that his extensive network will enable him to develop the football sector.

Mohammed is another FA chairman vying for the seat of the NFF president.

He is a seasoned financial expert with years of experience in football administration.

Mohammed studied Accounting and Economics at Middlesex University in the United Kingdom. Afterwards, he earned an MBA from the American International University in London.

He is the FCT FA Chairman, a position he has held since 2019. He used to be a FIFA licensed football agent for 10 years, 2004-2014, before going into administration.

In 2015, he founded the Heart Football Academy, Abuja, and also became the 2nd Vice Chairman of the Abuja FA.

From 2015 to 2019, he served as a Special Assistant to the Senate President, Bukola Saraki.

According to Mohammed, he is intentional about bringing core values to the Nigerian football ecosystem if elected as NFF president.

Suleiman Kwande is a former lawmaker from Plateau State who is also vying for the NFF presidential post.

Aside from being a politician, Kwande is also a serving board member representing the North-central in the NFF.

The former lawmaker is one of those who have been silent since the electoral process as he is yet to make official statements about his ambition.

Musa Amadu is a former NFF secretary-general during the Aminu Maigari-led administration, and he hopes to receive the presidency mantle from Pinnick during the September 30 election.

A legal practitioner with many years in football administration, he is the first Nigerian to receive a FIFA master’s degree in law, humanities, and sports management.

Ahmadu basks in the euphoria of being a member of the golden year of Nigerian football-2013 when Nigeria won the Nations Cup in South Africa, a fourth U-17 World Cup in UAE, and a seventh WAFCON title in 2014 in Namibia.

He says he will replicate the 2013 golden year if elected president of the NFF.