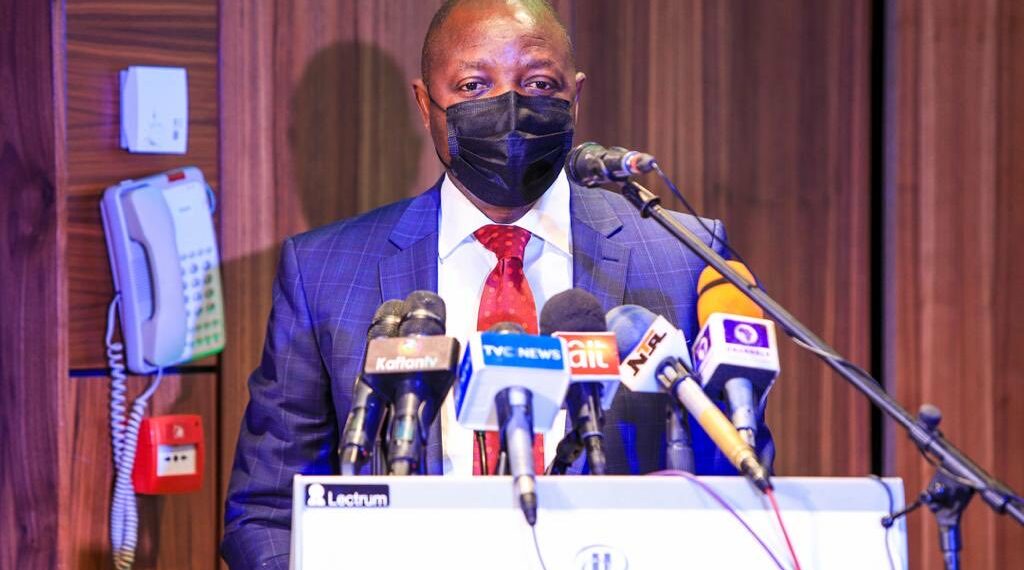 The minister assuaged the candidates’ concerns, although the Friday elections are still uncertain.

Some candidates in the upcoming Nigeria Football Federation (NFF) presidential elections have expressed confidence that the elective congress will take place on Friday, 30 September, in Benin as scheduled.

A cross-section of some presidential candidates spoke to newsmen after a crucial meeting with the Minister of Youth and Sports Development, Sunday Dare, on Tuesday in Abuja.

They noted that nothing had changed, adding that the election will still go ahead as scheduled on September 30 in Benin, despite a court order on September 15, putting the NFF Elections on hold.

Justice Inyang Ekwo, in a ruling on an ex-parte motion moved by counsel for the claimants, Celsus Ukpong, ordered the minister, [Amaju] Pinnick, or any person, acting on their instruction, to maintain a status quo.

This, he said, was pending the hearing and determination of the motion on notice for interlocutory injunction.

NFF’s 1st Vice President, Seyi Akinwunmi, said the meeting with the minister was just a heart-to-heart discussion about where they were as football administrators, government, and as Nigerians.

“It wasn’t anything controversial; there wasn’t any issue that will make anyone of us frown.

“So, really, there isn’t much to report, unfortunately, beyond the fact that we are all going back tonight to our various locations. I guess to continue our hustle and campaign for votes.

“The issue of the court order has to do with the Electoral Committee and not with us.

“So, there’s not much we can do. If the Electoral Committee says that this is what their interpretation of what was served on them means, that we can’t have elections, then we don’t. If it says we can, then we do.

“So, you don’t worry yourself over something you don’t have control over,” he said.

Idah Peterside, an ex-international, expressed his gratitude to the minister for allaying the fears of all the presidential candidates.

“We want to thank the Minister because we all had our fears concerning the election.

“You can see us happy and taking pictures with the minister. Everything is in order.

“We really want to thank the minister, as we had some reassurances that everything is in order and the government is taking care of it.

“We thank the minister for helping to calm all the nerves. So we are all going ahead unless something else changes,” he said.

Mouktar Mohammed, Chairman, FCT Football Association, said that the meeting was a welcome development, adding that as partners, the minister is the leader of sports in Nigeria.

“We obliged to the meeting as partners and aspirants to have a dialogue because there are issues on ground.

“So, it was a very good meeting and everybody comes away with the feeling that the government is guiding the process in the right direction,” he said.

Mr Mohammed noted that there were certain decisions that he expects the Electoral Committee to take which had to do with advice from the security agencies and some investigations.

He said all the presidential candidates were well aware of the court order, adding that they are all law-abiding citizens.

“There are still days to go and the court order could be vacated, but as law-abiding citizens, we will follow what the court says.

“So, it’s an ongoing discussion and there are no conclusions yet. I am sure in the next few days we will hear more.

On the 10-year Masterplan, the chairman said he was a big fan of the document, adding that the country now has a document that will make the game grow.

“The minister has done a good job with the Masterplan and I have said that if I am elected, I will work with the government to ensure that it is implemented properly.

“I have always felt that the NFF has to be a partner of government and all other stakeholders.

“So I would love to see a resolution of all the issues from any stakeholder in the football family,” he said.

The Head of Safety and Security Department, Confederation of African Football (CAF), Christian Emeruwa, on his part, said the presentation of the 10-year plan by the minister to all the presidential aspirants was the highlight of the meeting for him.

“More importantly, the minister handed over the 10-year master plan to each of the contestants with the hope that whoever emerges as the president should be able to work with it.

“This is also what the Federal Government wants to see in football.

“So, I think it was a good meeting. As you can see, everybody is happy and smiling and hopefully, we are looking forward to the show,” he said.