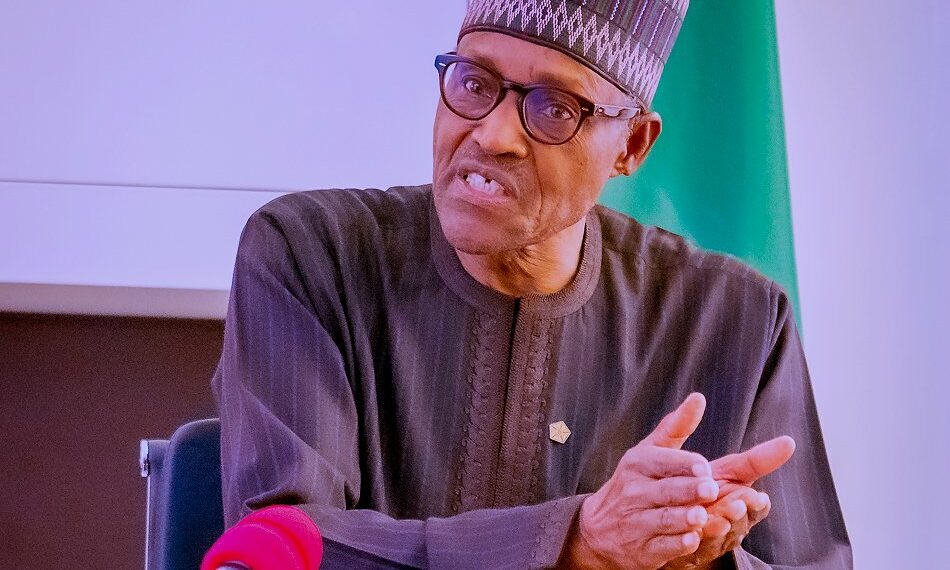 The masterplan made some far-reaching recommendations on laws and statutes governing the administration of football in Nigeria.

President Muhammadu Buhari has said football remains the number one sport in Nigeria and a national asset.

According to the president, his administration will resist any attempt to undermine its development.

Mr Buhari stated this when he received the 10-year Football Development Masterplan submitted by the Minister of Youth and Sports Development, Sunday Dare, on Tuesday in Abuja.

While describing football as “our passion and a major tool for unity,” the president affirmed, “It is the responsibility of the government to safeguard the sport, which has brought Nigeria many laurels and treat it as a national asset.

“Indeed, just as I expect and demand a higher standard of patriotism, responsibility, and commitment from those charged with the administration of our football.”

Mr Buhari also urged all concerned parties to work together constructively and patriotically.

The president used the occasion to spell out his expectations from the two-volume report.

He directed the Federal Ministry of Youth and Sports Development and the Nigeria Football Federation (NFF) to commence its implementation in phases.

The president said this should be carried out within the fine lines of relevant sections of the Nigerian laws on sports development and the statutes of the world soccer governing body, FIFA.

“This government is interested in developing a football culture that will accommodate global best practices.

“This will also help the nation to lay a solid foundation for domestic football and to put in place professionally and efficiently run leagues.

“It will also help in entrenching a consistent and stable football calendar and create a value chain which will boost the sports ecosystem,” Mr Buhari said.

He said that achieving this will guarantee desired progress in continental and international competitions. “I know that a lot of work went into putting this 10-Year Masterplan together.

“I received regular briefings on the work being done and I am happy that our goal has been achieved.”

President Buhari expressed delight that the Masterplan enjoyed the input of a wide range of stakeholders in football.

“I am equally happy that the Nigeria Football 10-Year Masterplan (2022-2032) identified 15 Key Areas of challenge.

“It has also provided practical recommendations to address these fundamental problems that have bedeviled football development in the country.

“The implementation of the short-term and medium-term plans should commence.

“I believe this will signal a positive turning point for our football and a major step forward in our bid to create a conducive environment for its sustainability, viability, and profitability.

“The Nigeria Football Federation, the body charged with the development of our football is directed to own and commence the implementation of this master plan under the supervision of the Ministry of Youth and Sports Development.”

The president, who reviewed the state of the game in the country, expressed concern that in the past years, football development had gradually stunted due to the neglect of the core orientation of football administration.

He described the governance structure around Nigeria’s domestic league as weak, adding that “standards are conveniently compromised.”

He, however, expressed delight that these issues and many more have been addressed in the Document.

The president, therefore, urged the NFF to salvage the domestic league at all levels, saying: “Nigeria’s football development must return to the path of focus on grassroots and youth development and an overall good governance structure around every level of its development. Nigeria now expects results,” he urged.

On the forthcoming NFF executive election, Mr Buhari reiterated his earlier communication to the body on the need for a more equitable and democratic representation in the Congress of the NFF.

According to him, this will ensure that critical stakeholders are not shut out and the most capable and competent men and women are elected to run the affairs of the Federation.

“This government has demonstrated political will. It will match it up with making the right laws and investments and working with critical stakeholders.

“I thank FIFA for its support and commitment to the development of Nigerian football which has been longstanding.

“I trust it will partner with Nigeria in its effort to improve the fundamentals of its football development,” he said.

In his remarks, the sports minister announced that the Buhari administration had disbursed over N15 billion to NFF through budgetary appropriations and Presidential interventions in the last seven years.

He commended the president for the attention given to football development in the country and for laying a solid foundation for the growth of the game.

The minister described the 10-year Masterplan, which took the Ibrahim Galadima -led 16-member Committee six months to prepare, as “a world-class document.”

He said the prescriptions set forth in the Football Masterplan if followed through with the needed will and determination, would set Nigeria’s football on a very sure footing and position it amongst the best in the world.

He added that the implementation of the Plan would resolve most issues around the status of the domestication of Nigerian laws, and NFF Statutes in line with FIFA Statutes, and create room for harmonious relationships in the football value chain of this country.

Mr Dare said: ”The Masterplan is envisioned to encapsulate functional strategies that would outlast the current administration and firmly place Nigerian football on the path to sustainable growth and development.

“Mr. President, with your approval, this document will be presented to the Federal Executive Council for approval and future funding.

“So that the implementation of the short, medium, and long-term plans can commence as part of the legacies of this administration.

“Thereafter, this document will be handed over to our football administrators, that is the Nigeria Football Federation, NFF, who shall be expected to implement key elements of these reports in stages.”

Mr Dare pledged that the ministry would monitor the faithful implementation of the Masterplan.

This, according to him, will ensure that attention is paid to the business opportunities along the value chain, governance structure, standardisation, and prioritisation of the welfare of footballers, education, and awareness.

“These would include Referees, Players Union, Coaches Associations, supporters, investors, local and international partnerships and collaborations,” he said.

Mr Dare also told the president that one of the most important aspects of the Committee’s work is the legal regime around football in Nigeria.

He added that the Masterplan made some far-reaching recommendations on laws and statutes governing the administration of football.

Mr Dare added that subject to the final decision of the NFF Congress, the Masterplan made recommendations for the expansion of the constituents for the NFF Elective Congress and Executive Board to 111 and 16 respectively, in order to meet new realities and needs.

Mr Galadima, a former Chairman of the Nigeria Football Association (NFA), noted that re-engineering the legal framework will put to rest the legality of NFF.

He said the Masterplan also recommended improving the tactical depth of coaches through utilising the core mandate of the National Institute of Sports and pragmatic sports programmes.

It also recommended regulating the operations of academies and grassroots-based programmes.