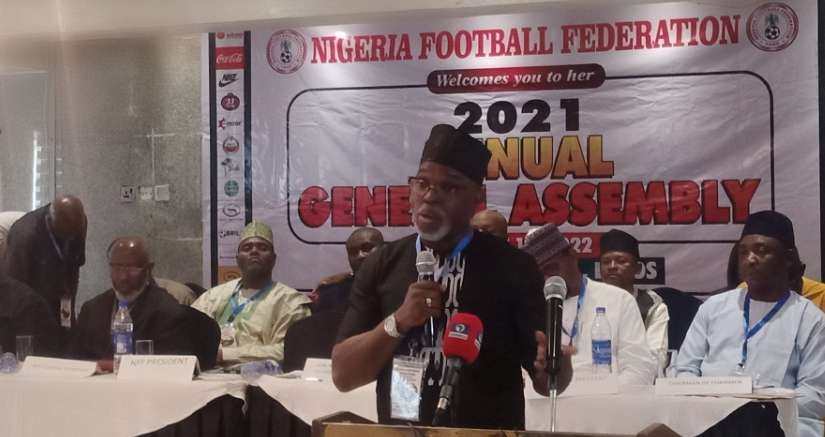 The Nigeria Football Federation (NFF) Elective Congress, which will usher in new executives for the administration of football in Nigeria, has been scheduled for 30 September in Benin City, Edo State.

The date and location of the elective congress were among the key decisions made at the Annual General Assembly on Thursday at the Best Western Hotel in Lagos.

PREMIUM TIMES gathered there were initial moves by the current board, led by Amaju Pinnick, to move the elections to October, but it was rejected by most Congress representatives, who were largely comprised of the 36 State Football Federation chairmen.

The 44-person Congress rejected the proposed election date of 20 October , instead opting for the original date of 30 September.

It also included representatives from the Leagues, the Coaches Association, the Referees Association, the Players’ Union, NFF Executive Committee members, invited dignitaries, NFF Management and Staff, and several other stakeholders.

For the umpteenth time, the incumbent president, Pinnick, again reiterated he would keep to his promise not to contest for a third term in office.

“As I stand before you today (Thursday), I want to thank the Congress for what they have done for Nigeria football in the last 8 years. I want to leave Congress as one unit the way it was handed to me in 2014.

“I want to say it here that I am not going to contest for the NFF President again,” Pinnick told the Congress in Lagos to effectively clear every iota of doubt surrounding his ambition to remain in office.

Already, Pinnick, during an interview on Arise TV, Monday, publicly declared he would work with whoever emerges as president after him having done his best in the last eight years.

He said: “Third term, no, no. I am fine and am telling you that as there are so many Nigerians that are capable to run Nigerian football.

“I will assist and work with whoever emerges as the new Nigeria Football Federation (NFF) President and that’s my promise. I’ll intervene but never interfere,”

Pinnick, who has been president of the NFF since 2014, is the first Nigerian to hold the position for two terms.

His second term is set to end on 20 September.