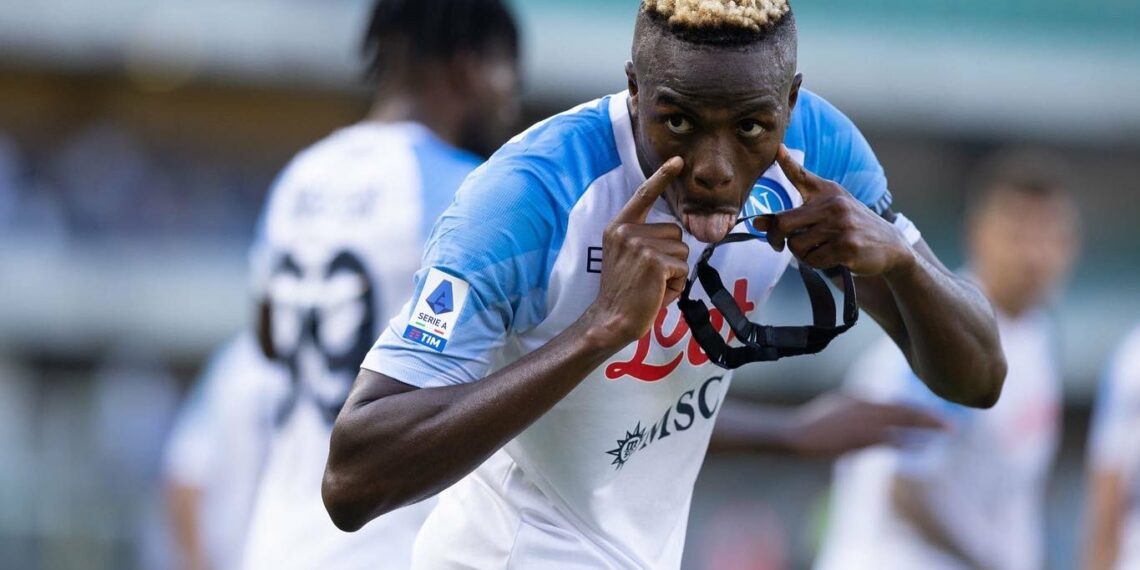 During Monday’s game, Osimhen kicked the ball into the stands in anger at the Verona supporters for making monkey noises.

Victor Osimhen, a Nigerian striker, kicked off the season with a goal in Napoli’s 5-2 away win over Verona in the Italian Serie A on Monday night.

Despite being racially abused during the game at the Stadio Bentegodi, Osimhen, 23, appears unfazed, describing his outing as “perfect,” scoring and earning the maximum three points with Napoli.

“Perfect Start Into A Long Journey, We Keep Going. Thanks To The Traveling Fans For Their Support, GOD Is The Greatest💯We Move” Osimhen wrote on his Twitter page after the Verona game.

Verona fans have a long history of racially abusing black players, and Osimhen was no exception on Monday.

However, after scoring on the stroke of half-time to turn the game from 1-0 to 1-2, Osimhen kicked the ball into the stands in frustration at the Verona fans who were making monkey noises.

READ ALSO: Serie A: Osimhen gets winning goal for Napoli

According to Sportitalia, the Nigeria international mocked them by pretending to cry into the camera.

Napoli fought back from a goal down to defeat Verona 5-2 at the Bentegodi, with Kvicha Kvaratskhelia scoring and assisting on his Serie A debut.

Osimhen admits it was ‘important’ for Napoli to get off to a good start and reveals what Khvicha Kvaratskhelia told him minutes before his goal.

“I’m really happy, it was important to start well. Spalletti trusts me and we are on good terms,” Osimhen told DAZN.

“I am not the kind of player who sets a target for goals. I want to help the team by scoring, the team comes first.

“Kvaratskhelia? Two minutes before the goal, he told me that he expected me to score. We are on good terms, I’ve been here for three years and am helping him settle in. We’ve seen what kind of player he is.”

While Napoli’s strong start is admirable, many will point out that they started the previous season similarly, going unbeaten for many games.

Unfortunately, they crumbled towards the end of the season when it mattered the most, costing them a title charge.