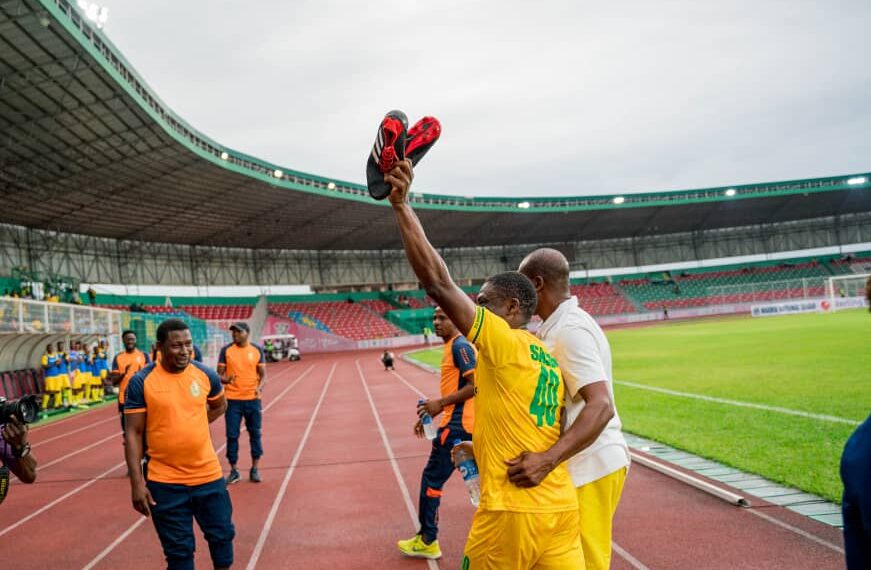 The Edo deputy governor ended his career by leading the Benin side back to the NPFL.

Until his retirement, Shaibu was a signed player of Bendel Insurance FC, a club he helped to secure a ticket to the Nigerian Professional Football League (NPFL).

The deputy governor announced his retirement in Benin at a news conference, shortly after the Insurance’s last match in the Nigerian National League (NNL) against Vandrezzer FC of Lagos.

Insurance won the week 22 by a lone goal to end the 2021/2022 soccer season, amidst jubilation among the fans at Samuel Ogbemudia Stadium.

He had earlier distributed souvenir which included jerseys with his name and balls to scores of fans who were present at the venue of the final league play.

Briefing journalists, the Edo deputy governor said he was elated that his six years sojourn with the Benin side ended with a ticket to the Nigerian apex league.

Mr Shaibu commended stakeholders, who helped to restore the past glory of the ancient football club.

“I am so excited today that in good health, I am retiring from professional football and thank the stakeholders in Bendel Insurance for this historic moment of retiring with jersey number 40.

“It’s first of its kind and I am so excited and happy about it,” he said, noting that he was more elated that his commitment to and rebranding of Bendel Insurance yielded the desired result.

The deputy governor, who recounted his football stints in Federal Capital Territory with YSFON U-20, Foreign Affairs FC as well as defunct Ijesha United and Nigerian Prisons FC, said he won all matches in the clubs except for a draw.

The retiring player, who noted that he exited without any injury, said the qualification for promotion of Bendel Insurance to the elite NPFL was the happiest moment in his football career.

He recalled winning a gold medal for Edo during the 20th National Sports Festival.

Mr Shaibu urged Coach Monday Odigie to live up to the bidding in the NPFL, assuring the club of the necessary state government support.

The club, he noted, could not afford to go back to the lower league, as they were back to where they rightly belonged.

He said the present government in Edo had demonstrated genuine love for sports with the upgrade of facilities at the Samuel Ogbemudia Stadium and rebranded both the men’s and women’s football clubs in the state.

According to him, Edo Government has returned the state as a home to sports, and a tourist site for sports development in the country.