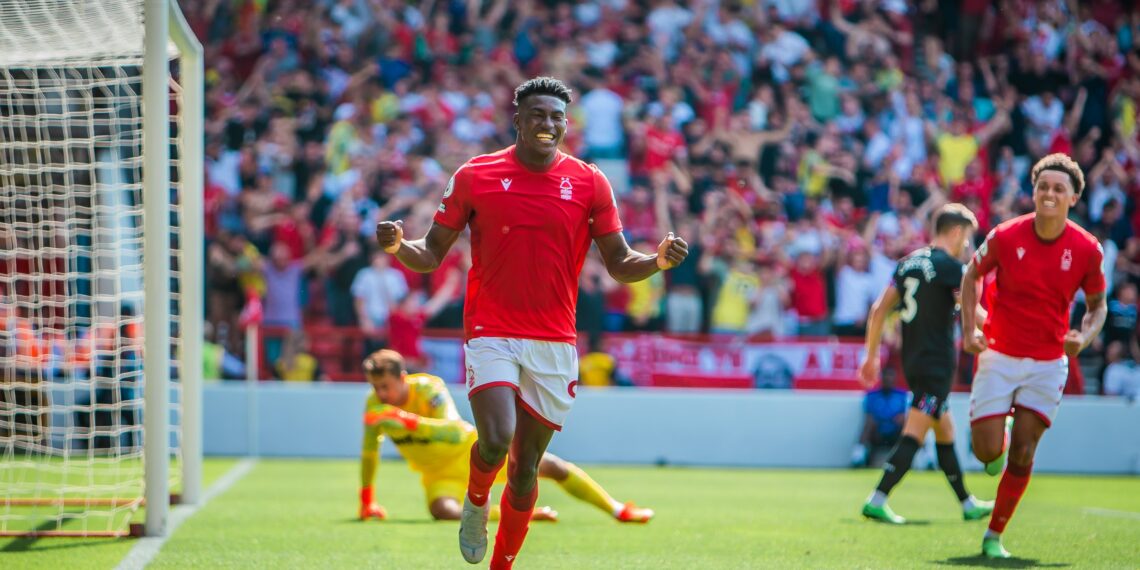 Nottingham Forest fans will sing Taiwo Awoniyi’s name throughout the rest of the weekend after the Nigerian, on his debut at the City Ground, gave the EPL returnees their first Premier League win in almost three decades.

Awoniyi, for all his endeavour and selfless running, did not know so much about the goal as West Ham defender Ben Johnson’s clearance came off the Nigerian’s knee and rolled across the line to send Forest fans into a frenzy. That goal came in the second minute of added time in the first half.

Forest and West Ham started the day with zero points, as both had lost their opening day fixtures 2-0; Forest away at Newcastle and West Ham at home to the league defending champions Manchester City.

Steve Cooper’s side started off brightly and pinned the Hammers to their half. Awoniyi won a free kick off Declan Rice in the fifth minute. The Hammers captain Rice was shown a yellow card after nine minutes as Forest maintained the offensive pressure. Awoniyi got his first goal-scoring chance in the 13th minute, but his header went wide.

Forest struck five minutes later and though it was a scruffy goal, it counted and Forest had liftoff in the Premier League on their return.

The second half was just a minute old when Pablo Fornals smashed his effort against the crossbar. That was going to be the recurring theme of the day. VAR then chalked off Brennan Johnson’s goal in the 53rd minute. Moussa Niakhate had a header well saved by Lukasz Fabianski as the game continued in an end-to-end action.

On the hour, Benrahma struck a perfect free kick, but the crossbar came to Forest’s rescue. Scott McKenna dangled an arm to stop a Jarrod Bowen goal-bound effort. VAR was called up again before the referee Robert Jones awarded the penalty. Rice took responsibility and Dean Henderson saved.