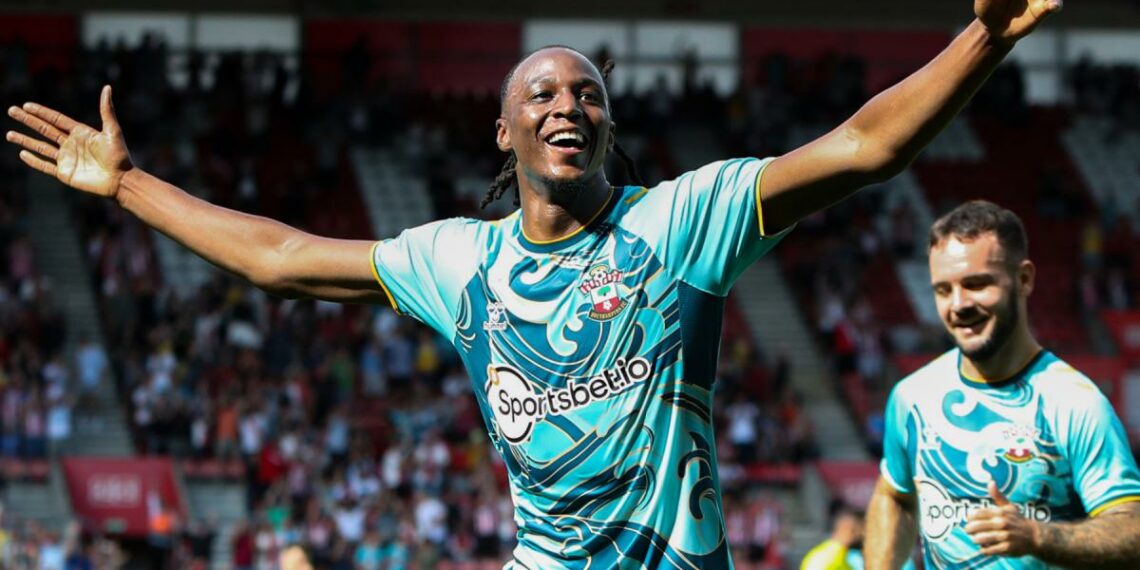 It was a busy weekend for Nigerian players in the Premier League on Saturday with the likes of Joe Aribo, Frank Onyeka, Wilfred Nididi and Kelechi Iheanacho all in action for their clubs.

At the Gtech Community Stadium on Saturday evening, Nigeria’s Frank Onyeka came off the bench in the second half as Brentford hammered Manchester United 4-0.

The Bees got off to a flying start against the misfiring Red Devils as they opened the scoring in the tenth minute after DaSilva made the most of a De-Gea error to put his team in front.

The host did not wait for too long for the second goal with Jensen doubling the lead for the Bees after another error, this time from Christian Eriksen.

The bad situation for the Red Devils turned worse as Ben Mee scored a header from a corner kick in the 30th minute and five minutes after Mbeumo courtesy of some incredible work from Ivan Toney put the Bees four-nil ahead.

While the goals feast was halted in the second half, Onyeka was brought on in the 80th minute for Norgaard to help shore up the midfield for the hosts.

Saturday’s outing was Onyeka’s first Premier League appearance since the middle of March due to injury and the Nigerian had another scare after a heavy challenge from Scott McTominnay.

Onyeka almost added a fifth goal for Brentford but his drilled shot was parried by De-Gea after United failed to clear their lines.

At St Mary’s, Joe Aribo came good for Southampton as he scored one of the goals in their 2-2 draw against Leeds United.

The Saints were initially two goals down before Aribo inspired the comeback with his 72nd-minute goal before Kyle Walker-Peters completed the equaliser.

While Manchester City romped to a 4-0 win over Bournemouth at the Etihad Stadium, the home games for Brighton and Wolverhampton ended in barren draws against Newcastle United and Fulham respectively.

Elsewhere, Arsenal continued their fine start to the Premier League season with a 4-2 victory over Leicester City at the Emirates on Saturday.

The Nigerian duo of Kelechi Iheanacho and Wilfred Nididi ended on the losing side as Gabriel Jesus turned on the style for the Gunners again with a superlative performance.

The Brazilian scored twice and also provided two assists to give the Gunners another glorious outing.

After coming close on a number of occasions, Jesus set the Emirates alight with the opening goal in the 25th minute.

This was after the hosts worked their way back into the box from midfield and a quick pass from Granit Xhaxa landed at the feet of Jesus, who wasted no time in opening his Arsenal account with a curled effort into the top right corner.

It was not long before the Gunners doubled their advantage through a set-piece from the left. Leicester failed to clear as Jesus rose to meet the deflection and head home his second of the afternoon.

Though Jesus was denied a hat trick, he had a hand in two other goals for Arsenal as Xhaxa and Gabriel Martinelli both got on target for the hosts.

Though substitute Kelechi Iheanacho set up Jason Maddison for one of Leicester’s two goals, it was not enough to deny Arsenal their second win in two league games.