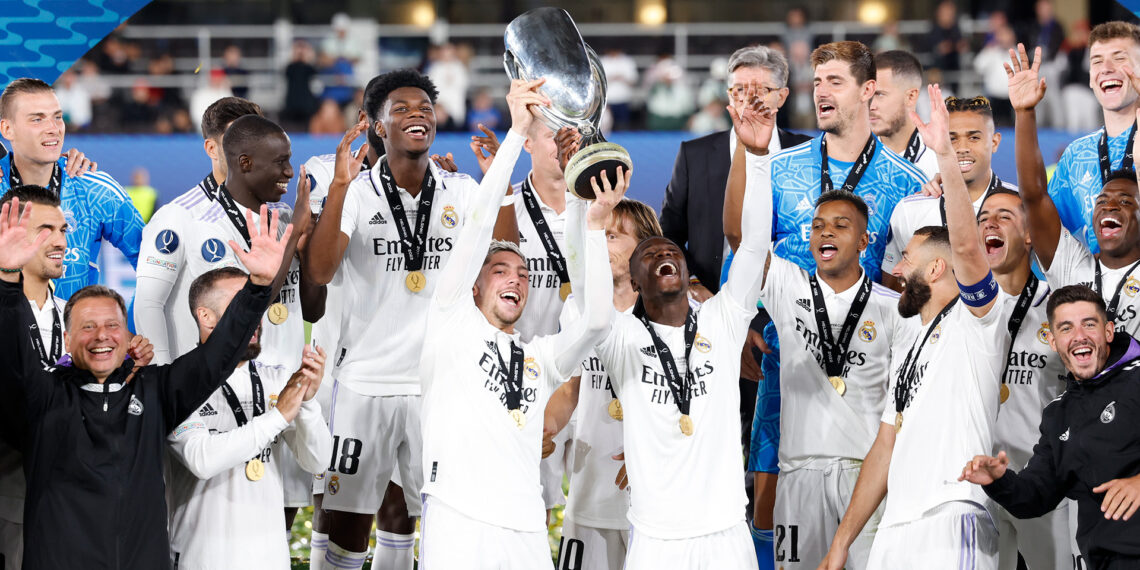 In the first half, David Alaba opened the scoring for the Champions League winners, before Karim Benzema made it 2-0 after the break. This is Real Madrid’s fifth victory in the traditional season opener and Carlo Ancelotti’s fourth as manager.

It was also the first time in European competition that semi-automated offside technology was used. Ancelotti named the same starting lineup that faced Liverpool in the Champions League final in May.

Eintracht Frankfurt had lost their most potent goal creator, Filip Kostic, to Juventus on Tuesday for around $17 million, and it showed as they struggled to trouble David Alaba, Dan Carvajal, Eder Militao, and Ferland Mendy-Real Madrid’s defensive four.

But it took Real Madrid until the 37th minute to break through the Frankfurt defence, and it was a cheap goal to concede.

At the back post, the Frankfurt defenders gave Casemiro time and space to nod the ball back into Alaba’s path. The ball had drawn Frankfurt goalkeeper Kevin Trapp, Evan N’Dicka, and Tuta out of position, allowing the Austrian to pass into an empty net.

In the second half, the familiar combination of Vinicius Junior and Benzema created the second goal. Vinicius got away from Almamy Toure, with the young Brazilian using his speed.

Benzema took up space on the edge of the box, and the France striker struck the pass from Vinicius first time, and Real Madrid found their second goal with Trapp unsighted. Before that, Casemiro had hit the crossbar with a well-struck shot from outside the box.

With 324 goals, Benzema has surpassed Raul to become Real Madrid’s second-highest goal scorer of all time, trailing only Cristiano Ronaldo with 450 goals.

After leading Real Madrid to their 14th Champions League title last season with many decisive goals, Ancelotti revealed the Frenchman is determined to win football’s highest honour, the Ballon d’Or.

“If we’re here, it’s largely due to his [Benzema] merits. He scored a lot of goals. He finished the season well, he scored a goal today and now he’s going for the Ballon d’Or award.”