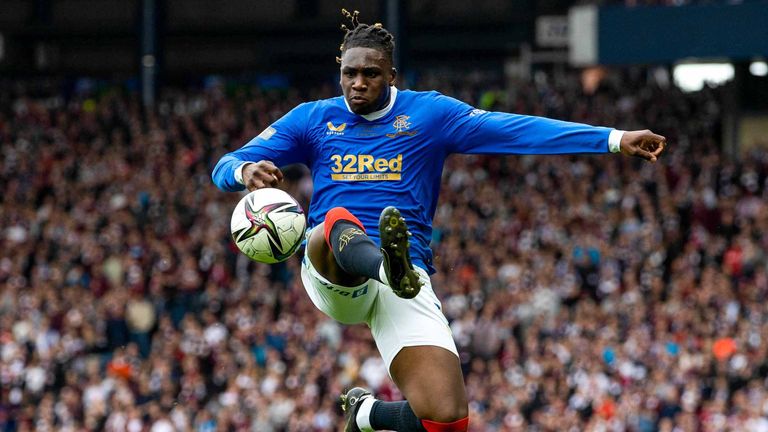 Since his spectacular performance in the Europa League final, Calvin Bassey has moved from being a relatively unknown quantity to a beautiful bride in the global football transfer market.

Several suitors in the past weeks have been falling over their heels for the Nigerian defender who fits the bill anywhere in the backline, especially on the left side of the defence.

According to the Scottish news outlet, Rangers News, Bassey flew to London last night to kick start negotiations that should culminate in his exit from Ibrox just like his compatriot Joe Aribo.

Bassey flew from Scotland to Gatwick amid reports of a transfer tussle between Ajax and Brighton for the services of the Nigerian international with the Dutch side believed to be in the pole position to seal the signing.

Rangers had lined up a pre-season game against Blackpool at Bloomfield Road on Saturday but Bassey was understandably excused to attend to other pressing needs as it concerns a move to another club.

As reported by ESPN, Ajax have already tabled an offer just shy of £20 million for Bassey with the Dutch giants set to sell defender Lisandro Martinez to Manchester United.

However, that falls short of what Rangers are looking for with both sides set to continue discussing the fee for Bassey.

With Bassey heading out for talks over a move away, Rangers look set to pocket a club-record fee for the second time this year.

Bassey joined Rangers from Leicester City two years ago for £230,000 and he has two years left on his contract.

The Nigerian who made 50 appearances across all competitions last season is said to have already spoken to the Ajax coach, Alfred Schreuder, and a five-year contract is in the works.

Since the exploits of Kanu Nwankwo and Finidi George in the 90s, a couple of other Nigerians like Sunday Oliseh, and Tijani Babaginda , among others, have turned out for Ajax.

Nigeria is not an emirate, By Chidi Anselm Odinkalu