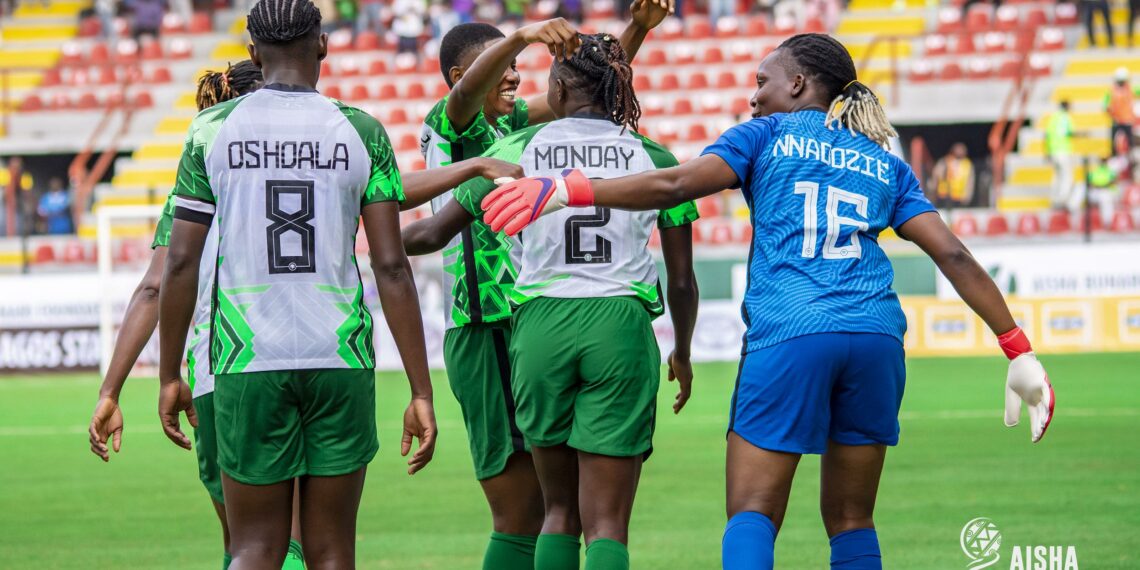 Super Falcons during their last game against South Africa

The Super Falcons coach has hinted at a change in tactics and personnel for the Botswana clash.

After Monday’s shaky start against the Bayana Bayana of South Africa and Asisat Oshoala’s tournament-ending injury, the Super Falcons are keen to get their campaign back on track at the ongoing Women’s Africa Cup of Nations in Morocco.

The Super Falcons beaten 2-1 by their South African counterparts in their group opener desperately need a victory against Botswana today (Thursday) if the dream to qualify for the World Cup and a record-extending 10th title has to remain on course.

Super Falcons captain, Onome Ebi while admitting it was disappointing to start their campaign on a losing note said the team has moved on and now looking to win all their remaining matches; starting with the tricky test against Botswana.

“We feel bad to have lost the opening match, and against South Africa for that matter, but we have been able to put that behind us. We resolved immediately after the match that we will give what it takes to win all remaining games.

“There is no need for too many words. All we want to do is get the win against Botswana to restore our confidence, and then we can take things from there,” Captain Ebi said on Wednesday.

Coach Randy Waldrum has already hinted at a change in tactics and even personnel for the Botswana clash.

Though depleted up front due to Oshoala’s injury, the Super Falcons have capable replacements for Thursday’s tie

Falcon’s first-choice goalkeeper Chiamaka Nnadozie should return against Botswana after missing the first match due to suspension. The forced departure of Oshoala means the vibrant Gift Monday or Mexico-based Uchenna Kanu will start at the fore for the nine-time champions.

Midfield ace Rasheedat Ajibade, who scored the goal against the South Africans, is expected to be the pivot again as the Falcons search for early goals from 9 pm at the Prince Moulay Al-Hassan Stadium.

Upset on the cards

As for debutants, Botswana who surprisingly top Group C after their opening day 4-2 win over Burundi, are hoping for an upset against the Nigeria women’s team.

He said: The ladies’ thrilling performances demonstrated beyond doubt that together we can achieve. I therefore humbly urge the ladies to continue to show their mettle against the best in Africa.

“Further, I wish to also thank the people of Botswana back home for their good wishes and their patriotic spirit, rallying behind this exciting team. We are more than excited about your collective support.

“Let’s rally more and more behind the Mares, especially in the second match (against Nigeria) which is a critical encounter in the tournament with its associated pressure and international focus now squarely on the Mares,” Letshwiti told the Botswana FA website.

After Thursday’s tie, the Super Falcons will face Burundi on Sunday while Botswana will be up against South Africa.

Victory on Thursday will calm some Nigerian nerves and allow the Falcons to look forward to Sunday’s encounter against Burundi with much confidence.