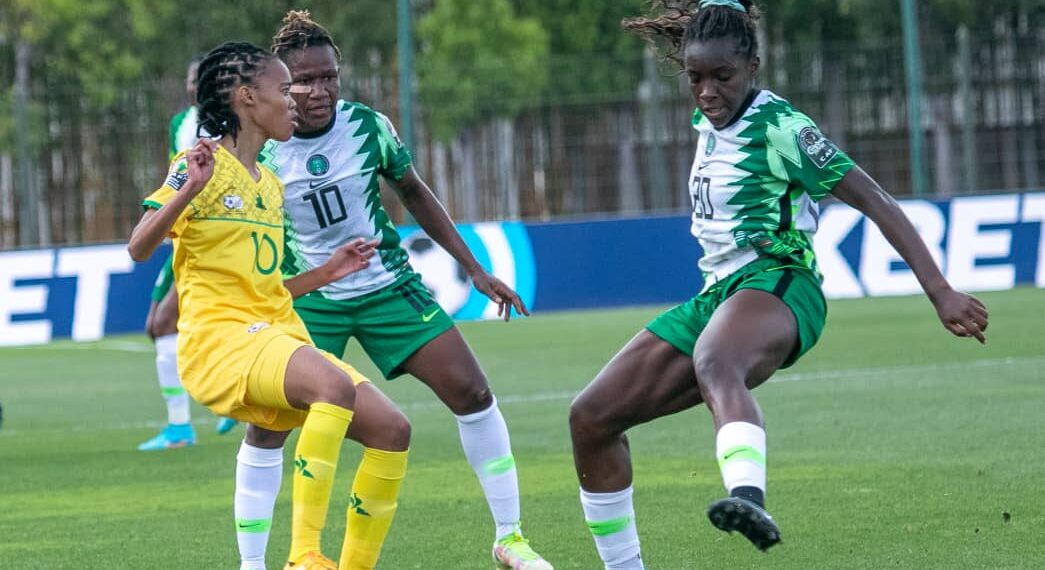 Nigeria 1-2 South Africa Ratings: Waldrum has many questions to answer for listless performance

For the second consecutive tournament, the Super Falcons lost to the Bayana Bayana of South Africa.

For just a sixth time ever, the Super Falcons lost at the Women’s Africa Nations Cup.

Two goals in the second half-in the 61st and 63rd minutes condemned the Falcons to an opening day defeat to the Bayana Bayana even though they got a consolation in the second minute of added time through Rasheedat Ajibade.

If the Randy Waldrum-led Falcons did not understand the enormity of the challenge as they chase a 10th WAFCON title, they now know. The better takeaway is that they have been here before. In 2018, they lost to Bayana Bayana, but they recovered to win the title.

Though on account of Monday’s showing, Coach Waldrum has many questions to answer as his team played like a pale shadow of themselves at the Stade Moulay Hassan in Rabat, Morocco.

Here are the player ratings:

Tochukwu Oluehi: 90 minutes
Oluehi was called into action twice and she failed through no fault of hers. The France-based goalkeeper commanded her box well in aerial situations. Oluehi was lucky not to be shown a red card for a reckless foul outside her box in the second half.
Rating: 5/10

Michelle Alozie: 90 minutes
Her debut at WAFCON was here and there. She was brave in attacking the space afforded to her on the right flank, but she was impetuous in her tackling.
Rating: 5/10

Osinachi Ohale: 90 minutes
The veteran was pumping long balls into the South African area, all match long to no effect. She and Ebi have been the central defenders for the Falcons for eons, but the coach may look for a replacement in this tournament.
Rating: 5/10

Onome Ebi: 90 minutes
The captain was solid and was at the heart of defending the Nigerian goal, especially in the first 15 minutes as the South Africans camped in Nigeria’s half. She read the danger well and tried to nick in with the needed interceptions as much as she could.
Rating: 6/10

Ashleigh Plumptre: 90 minutes
Putting Plumptre may have been a bright thought for Coach Waldrum, but she showed her unease in the run to the concession of the first goal to South Africa. She could have done better in attacking the ball before making the mistake of trying to win it when the attacker already had control.
Rating: 5.5/10

Halimatu Ayinde: 90 minutes
A poor showing from the defensive midfielder who has always had the energy but not the tactical awareness to make great use of it.
Rating: 4.5/10

Rita Chikwelu: 70 minutes
The other veteran in central midfield and though she made some offensive incursions to prise open the South Africa defence, she could not. We expected Chikwelu to be the feed for Oshoala, but it did not happen.
Rating: 5/10

Rasheedat Ajibade: 90 minutes
We could accuse the Atletico Madrid forward of hogging the ball when a simple pass could have sufficed, but she kept on running and took her goal well.
Rating: 6.5/10

Toni Payne: 90 minutes
Payne had some bright moments, but she was too predictable, and thus, for large swathes of the encounter, she was well marshalled.
Rating: 5/10

Asisat Oshoala: 82 minutes
Again, Oshoala failed to deliver for the Falcons, though we must add that she plowed a lone furrow before Waldrum took her off towards the end of the second half. Maybe the early injury to her knee took something away from the Barcelona star.
Rating: 5/10

Ifeoma Onumonu: 82 minutes
It was hard to remember any wonderful moment from the U. S.-based striker before they took her off. She looked leggy and was not ready to run beyond her marker to receive the ball.
Rating: 4/10

Substitutes
Vivian Ikechukwu: 20 minutes
The first of three substitutes and Ikechukwu brought some fight into the match for the Falcons, even though she looked too eager off the ball.
Rating: 5/10

Francisca Ordega: 08 minutes
It was a surprise that Ordega started on the bench but immediately after she came on, the South Africans started backtracking.
Rating: 5/10

Uchenna Kanu: 08 minutes
Another surprise exclusion from the starting 11 by Coach Waldrum.
Rating: 5/10

Manager: Randy Waldrum
Coach Waldrum got it wrong in his tactical setup and selection. The front three were isolated from the midfield and the use of long balls to prise open the South Africa defence failed abysmally. With the speed and potency of Oshoala to build around, the coach did not show enough determination to unlock Nigeria’s talisman.
Rating: 4/10