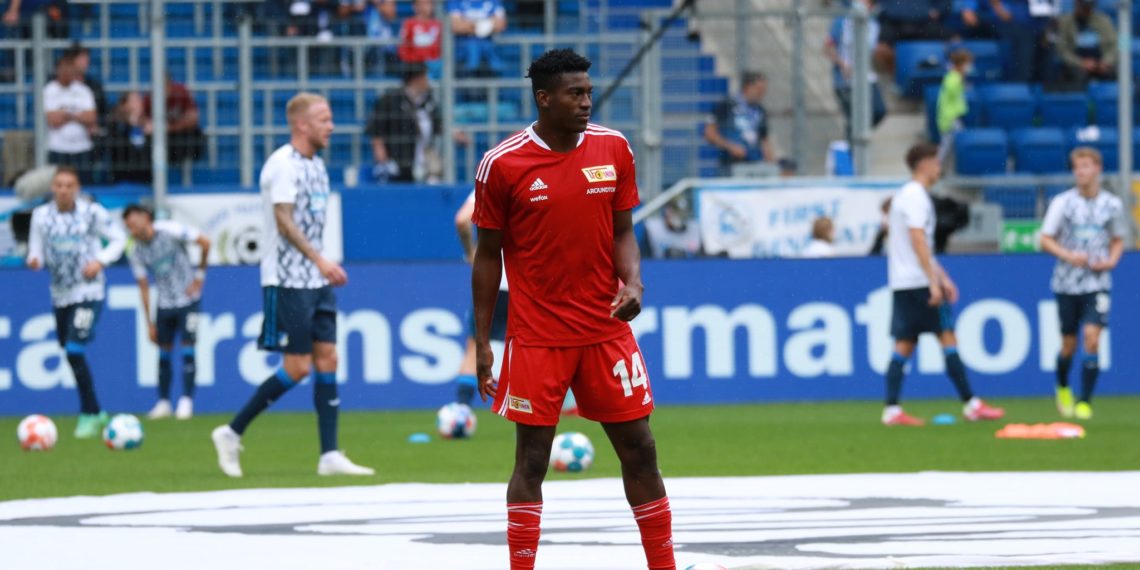 Taiwo Awoniyi scored his 13th goal of the season during Union Berlin’s 2-0 victory over Eintracht Frankfurt on Sunday.

The striker scored against FC Koln on April 1 powered a left-footed shot past the Eintracht Frankfurt goalkeeper in the 17th minute to give his side the lead.

Union Berlin are sixth on the Bundesliga table with 47 points from 30 matches and pushing for another European ticket.

Ademola Lookman was on target for Leicester City during their 2-1 away defeat to Newcastle at St James Park.

Ademola scored in the 19th minute after converting Ayoze Perez’s backheel pass to record his sixth goal of the season, the highest he has ever scored.

According to Opta, “Ademola Lookman (6) has now scored more Premier League goals in 21 appearances for Leicester than he managed in 70 top-flight games for Everton (1) and Fulham (4) combined, netting in each of his last three league starts. Habit.”

The Nigerian forward has scored in his last three starts for the Foxes.

Meanwhile, Kelechi Iheanacho couldn’t help the visitors after his introduction for Patson Daka in the 78th minute.

Iheanacho had 12 minutes of action but had only three touches and Leicester are ninth on the table with 40 points from 30 matches.

Dennis scored his 10th goal of the season for Watford during their 2-1 home loss to Brentford.

Dennis equalised for the Hornets in the 57th minute after a VAR check, but he couldn’t help Roy Hodgson’s side, as they suffered their 10th consecutive home defeat.

The forward’s teammate, Etebo, saw the game on the bench while Ekong and Kalu did not make the matchday squad.

Similar to the fate of Ekong, his compatriot in Brentford, Frank Onyeka was absent during his club’s visit to Vicarage road.

Watford are running out of games to save their Premier League slot as they boast just 22 points from 32 games-six points from safety.

Semi Ajayi’s West Brom return to winning ways after a 2-1 victory over Blackpool at the Hawthorns.

Ajayi played for 90 minutes during the encounter, with four clearances and one tackle and interception each.

The Scottish cup semi-final clash between Rangers and Celtic had the participation of a trio of Nigerian players-Aribo, Bassey, and Balogun.

The game ended 2-1 in favour of Rangers with Calvin Bassey providing an assist for the winning goal in extra time as they proceed to the final where they will meet Hearts.

Bassey played throughout the game while both Aribo and Balogun played their parts in the victory. Scott Arfield replaced Aribo in the 75th and scored Rangers’ equaliser three minutes later while Balogun came on in extra time for Borna Barisic.

Ola Aina played his second consecutive game for Torino in their 1-1 away draw to Lazio on Saturday.

Winifred Singo came on for Aina after 74 minutes. During his game time, Aina made four clearances and one interception.

Torino continue to improve from last season and are in 11th place with 40 points.

Isaac Success contributed an assist in Udinese’s 4-1 home victory over Empoli on Saturday.

The 26-year-old assisted Gerard Deulofeu in the 52nd minute to increase his goal contributions to seven in 18 appearances.

Udinese are comfortable in mid-table, in 12th place with 39 points from 31 matches.

Nigerian winger Samuel Chukwueze started for Villarreal during their 2-1 away victory over Getafe on Saturday.

Chukwueze, who scored the winner against Bayern Munich in midweek, featured for 68 minutes during the encounter.

Villarreal are seventh on the table with 49 points from 32 matches.

The 25-year-old has scored 16 goals and assisted seven times in his 30 appearances for his second-placed team.

Moses Simon’s Nantes dropped points at home to Angers in a 1-1 encounter.

Simon played for 86 minutes during the encounter. The winger has yet to make any goal contribution since February when he created an assist for Kolo Muani in the fourth minute against PSG.

Moses has scored three goals and assisted seven times in the league this season.

Nantes stay in 10th place with 47 points from 32 matches.

The presence of Terem Moffi and Innocent Bonke could not help Lorient stave off a 2-1 defeat by Nice on Sunday.

Moffi starred for 67 minutes while Bonke saw action for 87 minutes.

Lorient are mired in a relegation struggle as they stay 16th on the table, just two points above 18th-placed Clermont.

Super Eagles goalkeeper, Maduka Okoye, was in action during Sparta Rotterdam’s three-nil away defeat to Fortuna Sittard in a rescheduled fixture.

Okoye, who performed excellently last month, failed to continue on that path as he has conceded six goals in his last three games.

The 22-year-old could only make one save, clearance and interception during his 90 minutes of play.

Sparta Rotterdam prop up the Eredivisie table with 22 points from 28 matches and four points from safety.

Musa played for 73 minutes but fired blanks during that period.

Nwakaeme last scored in March against Goztepe. Trabzonspor lead the Super Lig table with 72 points from 33 matches, 11 points better off than second-placed Fenerbahce, and five games to the end of the season. Fatih Karagumruk are in 10th place.