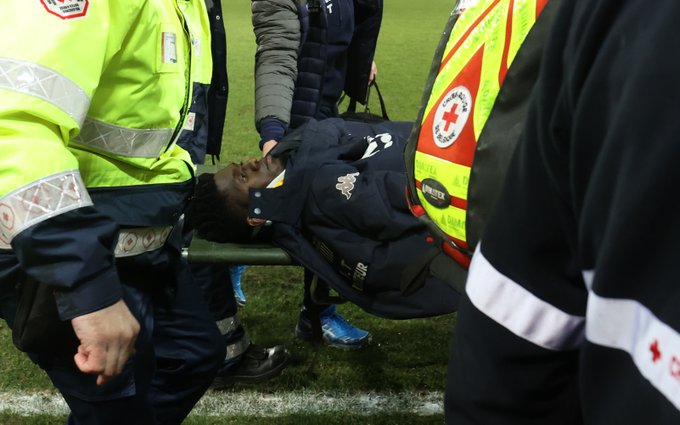 Ozornwafor who has played twice for the Super Eagles caused a huge scare when he collapsed twice on the pitch and lost consciousness.

Sporting Charleroi has released new updates on the health situation of their Nigerian defender Valentine Ozornwafor who became unconscious twice during a league game on Saturday.

Ozornwafor who has played twice for the Super Eagles caused a huge scare when he collapsed twice on the pitch and lost consciousness while representing his Belgian club in a league game against Royale Union Saint Gilloise (RUSG).

According to reports, Ozornwanfor, a former Enyimba player, was hit in the face by Royal Union’s striker Dante Vanzeir in a challenge in the 46th minute and fell facedown losing consciousness in the process and stretchered off the pitch.

However, Charleroi FC in the latest update provided on the health of the central defender via a statement posted on their verified Twitter handle suggests there is no longer cause for alarm.

The Belgian club said that everything is under control as the player is now conscious and under observation.

“The first news about our defender Valentine Ozornwafor is reassuring. After losing consciousness twice in the field, he is now conscious and will remain under observation, according to the concussion protocol,” Charleroi wrote on Twitter.

Though Chalorei were eventually hammered 3-0 in Saturday’s tie, they would take consolation in the improving health of their Nigerian defender whose situation may have turned worse if not well-taken care of.

Ozornwanfor, 22, joined Charleroi on loan from Turkish club, Galatasary, having previously also featured on loan at the Spanish club, Almeria.

In June 2020, another Nigerian player Taiwo Awoniyi was also involved in a similar situation

The then Nigeria youth international was forced off in the 23rd minute and was replaced by Karim Onisiwo in his side’s 1-0 loss to Augsburg in a Bundesliga game at Opel Arena.

Awoniyi was stretchered off with his neck in a brace and was motionless before he was rushed to the hospital for further observation.

“The last thing I remember was when I headed the ball, then I passed out. It was really hard to regain my consciousness, and to properly “wake up”. It also took some time before I was able to remember everything” Awoniyi said in an interview with Brila FM as he recounted his ordeal.

Football protocols around head injuries and concussion have been tightened to give greater protection to the players.