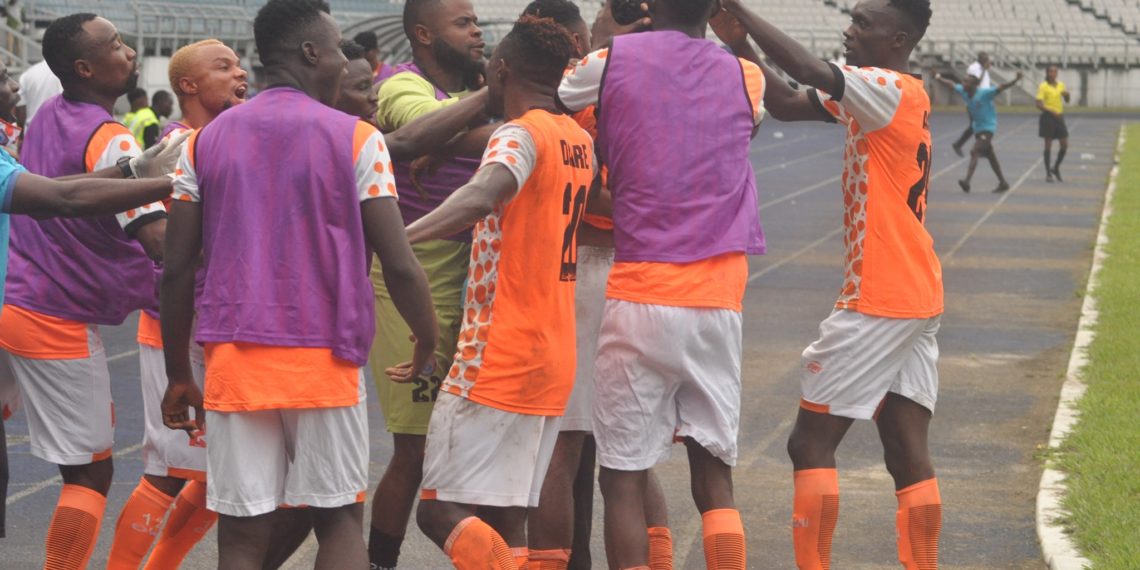 Akwa United are three points ahead of their closest challengers with five matches to play.

Akwa United’s hope of winning the Nigeria Professional Football League (NPFL) title for the very first time is still very much alive after they recorded a 1-1 draw away to Rivers United in Port Harcourt over the weekend.

The game in Port Harcourt was one of the NPFL match-day 33 fixtures played across the country.

Charles Atshimene gave Akwa United the lead in the 53rd minute, and, while it was looking like they would pick maximum points in the Garden City, Bakary Bamba struck three minutes from full time, to hand the hosts a share of the spoils.

With the result, the Promise keepers maintained their lead at the top of the NPFL log with 61 points, though the five-point lead at the beginning of the weekend has been cut to three points as both Nasarawa United and Kano Pillars, in second and third places respectively, won their matches.

With the 61 points already accumulated with five games to go, this is Akwa United’s best points tally ever in a single NPFL season.

In Okigwe, Heartland edged Rangers 2-1 in the Oriental Derby at the Dan Ayiam Stadium, Owerri. Mbaoma Chijioke fired Heartland in front in the 11th minute before Elijah Ani levelled for the Flying antelopes in the 24th minute.

Chijioke Akuneto restored the lead and effectively gave the Naze Millionaires the win with his goal in the 37th-minute.

Despite the win, the Fidelis Ilechukwu-led team remains 12th on the log with 44 points while Enugu Rangers’ position is unchanged in the seventh position with 52 points.

Elsewhere, Plateau United recorded the biggest win of the day as they thrashed Ifeanyi Ubah 4-0 in Jos.

The victory moved the Jos-based side from 10th to ninth on the log with 47 points.

Enyimba came from behind to beat Jigawa Golden Stars 2-1 in Aba while Warri Wolves also defeated Kwara United 1-0 in Warri.

Adamawa United and Sunshine Stars ended their tie in a barren draw while Wikki Tourist beat Abia Warriors 1-0 in Bauchi.

With five games left in the NPFL21 season, the top five teams are separated by five points, and at the bottom of the log, Adamawa United (24 points), Ifeanyi Ubah, (34 points), and Warri Wolves (34 points) will continue to fight to escape relegation.