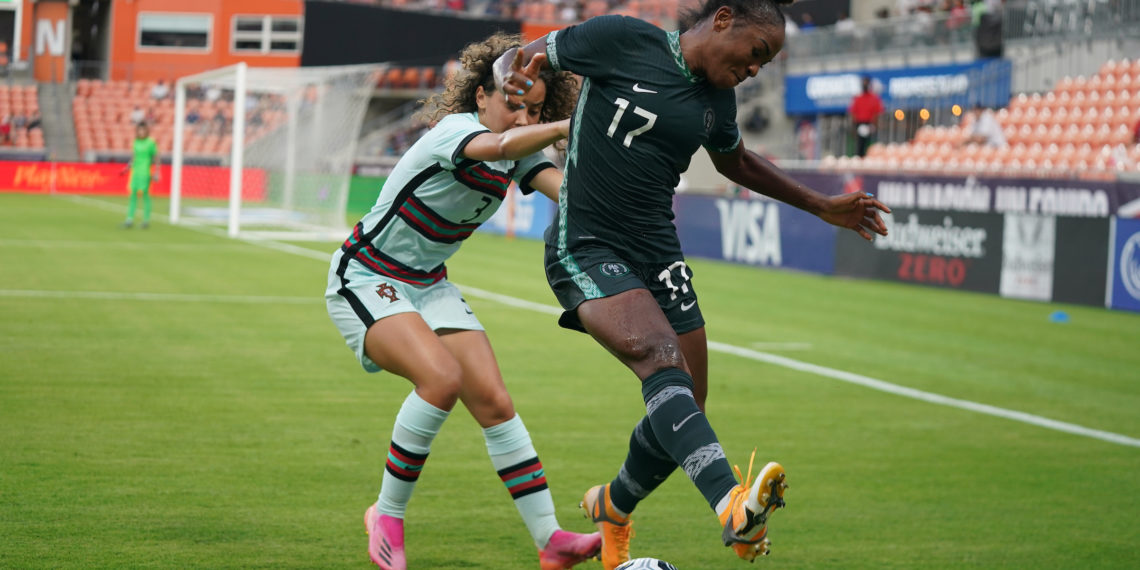 Rasheedat Ajibade got the late equaliser for Nigeria.

Portugal and Nigeria settled for a thrilling 3-3 draw late Sunday night in their second game of the Summer Series invitational tournament that is being held in the United States.

The Super Falcons showed high resilience as they battled from two-goal deficits twice to equalize in the dying moments of the entertaining encounter.

Sunday’s tie saw Portugal scoring twice inside the first 34 minutes. The Super Falcons pulled a goal back just before halftime but Portugal restored their two-goal lead in the second half before the Nigerian women fought back for two more goals.

Coming off a 1-0 loss to Jamaica on the first matchday of the Summer Series, the Super Falcons were eyeing victory over the Portugal team who had also lost 1-0 to the USA in their opening match.

Both teams had quality chances very early. In the 11th minute, Nigeria goalkeeper Tochukwu Oluehi made a great one-on-one stop near the top of the penalty box after a Portuguese attacker had burst through.

Five minutes later, Super Falcons captain Asisat Oshoala, who missed the Jamaica game got behind the defence on the right side with her powerful strides before shooting wide left of the goal.

Portugal broke the deadlock in the 22nd minute with some help from Nigeria’s Chidinma Okeke who inadvertently knocked the ball into her own net while making a sliding attempt to clear the ball away.

At the half-hour mark, Portugal got the ball in the net again but the goal was waved off for offside. Replays however showed it was a debatable call.

Portugal finally doubled their lead in the 34th minute off a free-kick from just outside the penalty area on the right side. Andreia Jacinto crossed to the far post where Portugal captain Carole Costa was left unmarked and she volleyed home inside the six-yard box.

Portugal pressed for more goals but they missed the chances that came their way.

Those missed chances proved costly as Nigeria, just before halftime, pulled a goal back off a short corner kick from the right side that was finally poked into the net by Michelle Alozie, who is one of the new faces in the Super Falcons set-up.

Four minutes later, Nigeria once again pulled to within one, this time on a Portugal own goal.

Nigeria had a chance to tie in the 83rd minute but the beautiful effort struck the crossbar.

However, six minutes of stoppage time was just enough to get an equalizer for coach Rany Waldrum’s ladies with Rasheedat Ajibade scoring at the death.

After playing two matches each in the Summer Series, Portugal and Jamaica now head home while the USA and Nigeria will finish the Summer Series on June 16 in Austin, Texas in what will be the first-ever match at the brand new Q2 Stadium.

INFOGRAPHICS: How women farmers are responding to climate change in a Nigerian state