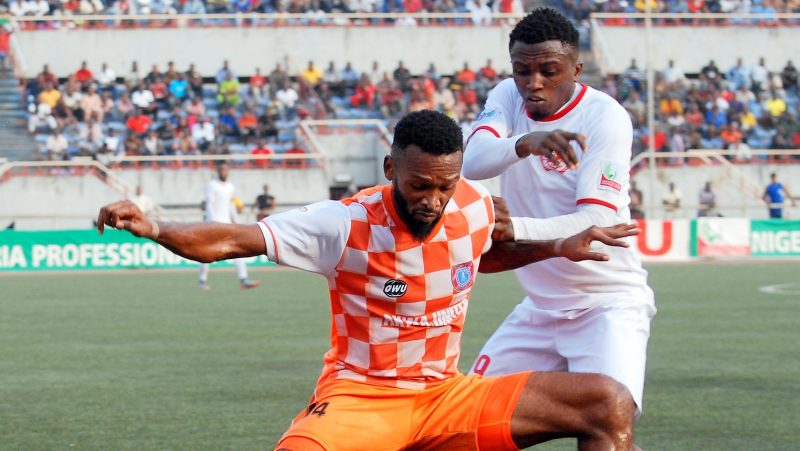 In a week 12 Nigeria Professional Football League [NPFL] match between Enyimba FC and Akwa United at the Enyimba Stadium in Aba on February 24. Enyimba led by a goal scored by Augustine Oladapo till the fourth minute of added-on time before Akwa United equalised through David Philip. This is a very normal occurrence in football, but in the NPFL, it is a rarity- for a home side to concede a goal in the fourth minute of stoppage time.

The popular refrain and widely held belief on the NPFL is that home teams do all they can to win at all costs; either with the help of bad-tempered and sometimes violent fans and fearful referees-who [are constrained to] hand favourable decisions to the home teams to ensure their safety.

Premium Times took to task the results in the current season [the first 14 weeks], which were played without fans due to the COVID-19 protocol restricting the large gathering of people, and juxtaposed it with results from the 2019 and 2020 seasons. We found that the absence of supporters at matches has not changed the pattern of results from the league.

Wale Quadri, the Media Officer for MFM FC, an NPFL side told Premium Times, “Personally, I don’t think the absence of fans is having any effect on results, whether fans are around or not, the aim of every team is to win, so if for a reason or the other, you don’t win, I don’t think it should be attributed to fans, that’s my opinion.

“However, if you asked the players, they may tell you something different, because they are the major actors but for me, I don’t think the fan’s absence is influencing the results we are seeing in the NPFL this season.”

Enitan Obania, a journalist who covers the league, said the impact has been both positive and negative. “I think it’s affecting the results both positively and negatively. For instance, referees can be firmer in their decisions more than ever because they are not afraid of irate fans pursuing them after any game.

“Then for teams like Kano Pillars who enjoy massive home support, the absence of fans to put opposing teams on the edge might be affecting their home results. The fans also put their own team under pressure to deliver also, so it’s both ways.”

Looking at Pillars’ results over the last three seasons shows a consistency whether the fans were present or absent. In the 2019 season, Pillars had seven wins, three draws, and suffered one loss at the Sani Abacha Stadium. The next season-2019/20, in an abridged NPFL season, broken into two groups-Pillars won nine of their 11 home matches, drawing the other two. In the current season, after eight home matches, they have won seven and drawn one. The thread forecasts Pillars could end the season with at least 90% of their home matches ending in wins.

Israel Abia, Enugu Rangers’ forward-the highest goal scorer in the NPFL last season told Premium Times he believes no crowds in stadiums have helped away teams this season but he also said the League Management Company [LMC] and the Nigeria Football Federation [NFF] have done their bit to ensure less favouritism for home teams.

“Yes, there is a better chance of winning away from home compared to last season as the referees seem to be fairer in their decisions and this is where I think the LMC and NFF have done well.”

Referees are referred to derogatorily as ‘the men in black” because of their sometimes-jaundiced decisions, especially to the benefit of the home team. But sometimes, their decisions are understandable because like every human being their immediate environment and the need to be in the good books of home fans also affect them.

Sean Ingle, writing in the Guardian in 2013 said, “Yet the following is also true: they [referees] are unwittingly and incontrovertibly biased towards home teams–especially those with larger crowds.” He cited a study done at the Wolverhampton University by Alan Neville, who said the evidence of refereeing bias towards home teams is “overwhelming”.

The conclusion with the statistics in the NPFL shows there are more indices, apart from the home crowd and supposed referee bias, hindering away teams from getting three points on their travels. These could include the length of travel, player fatigue, sport science, etc. COVID-19 restrictions have not affected the NPFL as much as one thought in the face of the referees being fairer and the absence of an intimidating home crowd.

Women: It’s Time To Do Too Much!, By Osasu Igbinedion