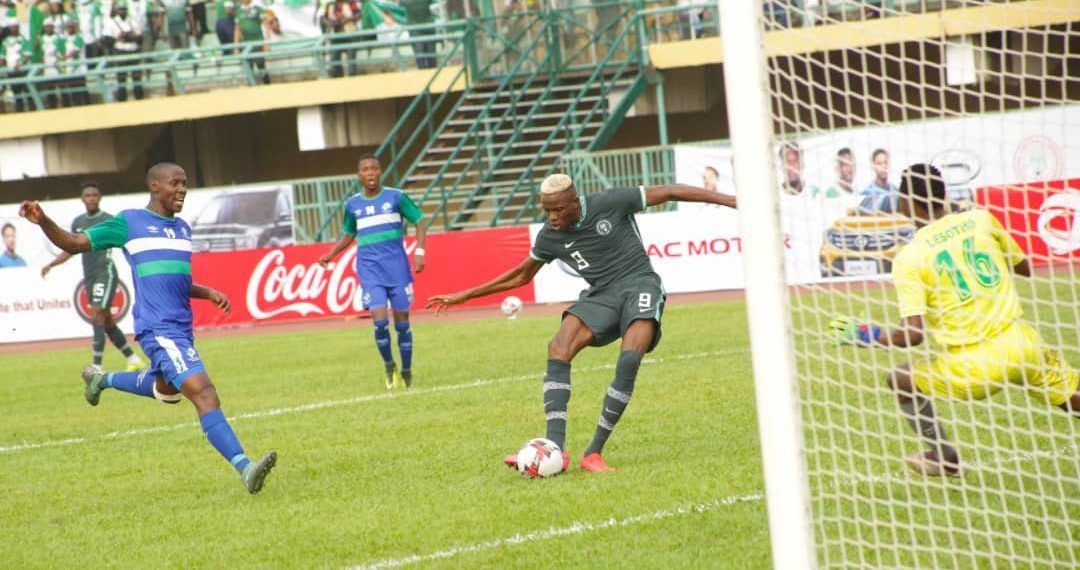 Victor Osimhen against the Crocodiles of Lesotho

The Nigeria national team went unbeaten all through the qualifiers.

The Super Eagles marked their return to Lagos with a 3-0 win over the Crocodiles of Lesotho on Tuesday evening in their final game of the 2022 AFCON qualifiers.

Victor Osimhen, Oghenekaro Etebo, and Paul Onuachu got a goal each as the Super Eagles ended their campaign in grand style. The Super Eagles had already booked their place at next year’s AFCON tournament in Cameroon with their 1-0 win over the Benin Republic last Saturday in Porto Novo.

Gernot Rohr made four changes to the starting 11 from the match against the Benin Republic. Francis Uzoho started his first game for the Eagles since he got injured against Brazil in a friendly in November 2019. Alex Iwobi came back into the team after a false positive COVID-19 test just as Henry Onyekuru, Maduka Okoye, Joe Aribo, and Ola Aina were all rested.

Osimhen had the first real chance of the game but his shot from outside the box in the eighth minute missed the target. Iwobi came close with an effort four minutes later.

The deadlock was finally broken in the 22nd minute when Osimhen got on the end of a pass from Kelechi Iheanacho. The Napoli forward nipped ahead of the Lesotho goalkeeper and lifted the ball into the net.

Etebo added the second goal five minutes after the break after he was set up by Osimhen. The icing on the cake was provided when substitute Onuachu scored Nigeria’s third with a fine strike following a well-laid pass from Henry Onyekuru.

The Super Eagles finished top of Group L with 14 points from six games.