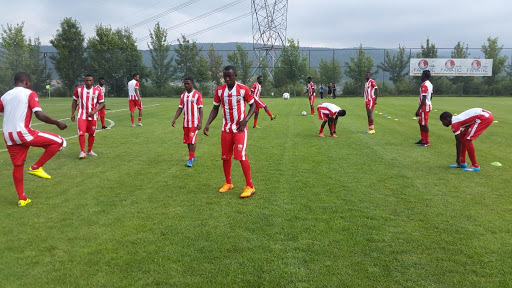 Heartland FC during one of their training sessions [PHOTO: Heartland FC]

The coach claims that four players would have been demoted, if they had lost in Lagos

Heartland Head coach, Fidelis Ilechukwu, on Sunday, led Heartland FC of Owerri to defeat his former team, MFM, at the Agege Stadium in Lagos in one of the matchday nine fixtures in the Nigeria Professional Football League (NPFL) 2021 season.

Since his move to Heartland at the beginning of last season, it has been one complaint after another and just last week, Ilechukwu complained about unpaid wages in the camp of the Naze Millionaires before heading into the Sunday game in unbranded jerseys.

PREMIUM TIMES can report that the required players’ name on jerseys was done with a pen and the Heartland jersey was without the logo of the team.

Adachi Emmanuel of Heartland opened the scoring from the spot in the seventh minute before Muyiwa Balogun levelled for MFM in the 49th minute before Jimoh Gbadamosi ensured Heartland secure their first ever win in Lagos over MFM and a first away win of the season.

Reacting after the game,  Ilechukwu told PREMIUM TIMES that his team needed to fight hard to escape relegation and claimed that four players would have been demoted if they had lost to MFM in Lagos.

“It’s not easy, we are so happy with the quality of the game but most importantly the three points because we need to fight to come out of relegation and I give it to my boys because MFM is a fantastic team.

“I told my boys that if we lost this game or even took just one point, four people would go, which means I would demote them if they lost the game.”

The coach  was happy to get one back on his former team. “MFM beat us last season in Owerri and we came here to pick a win, but if I did this interview before the game it might be difficult to pick the win.”

On the crises rocking the camp of Heartland, he said Heartland management must respect contracts [with players and coaches], which means they must pay what they are owed.

“it is a must they have to pay. And you know the reason is because we could be  banned and to me it’s a good thing because players must not be allowed to suffer-so they should pay. That’s why it’s a contract and they must respect it,which is why we are giving a deadline.”

On his part, MFM head coach,Tony Bolus, claimed that he never expected the defeat even though they were facing Ilechukwu, who knows the team very well.

“We never planned for the defeat, it’s a bad day for us and I take all the responsibility for whatever happened in the team. I know my team too well.

”If the team doesn’t function well, I am the coach and I should adjust it. In this team I take the decisions so there is no way Ilechukwu could have influenced the performance of my team,” he said.