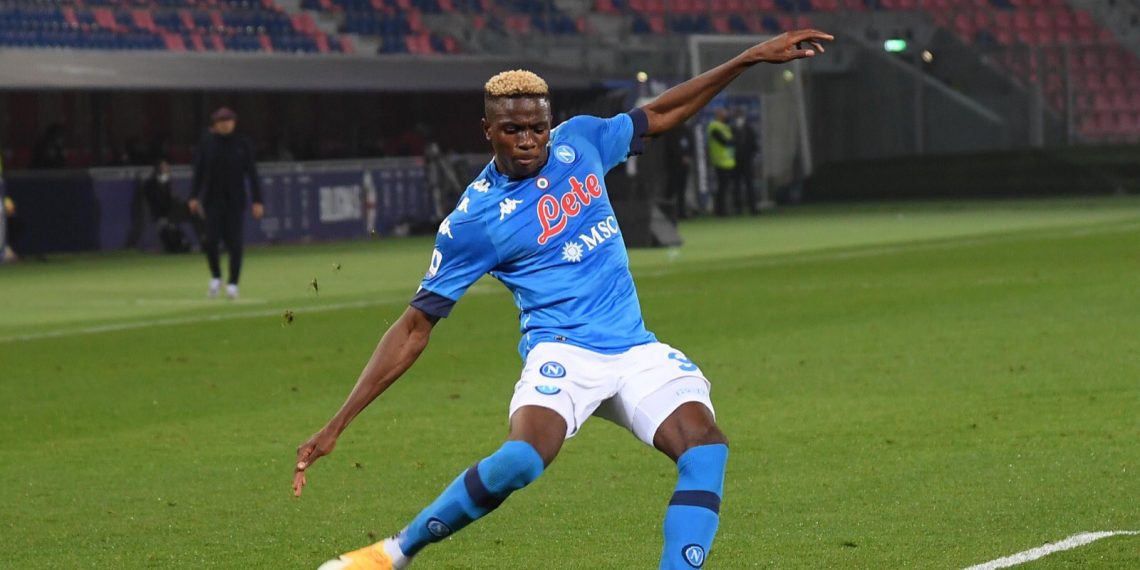 Victor Osimhen would have heaved a sigh of relief on Sunday when his headed goal won all three points away to Bologna. The costliest player in the COVID-19-impacted transfer market got his head on a cross from Hirving Lozano in the 23rd minute.

The 21-year-old ghosted to the far post, unattended, was able to steer his header past Bologna goalkeeper, Lukasz Skorupski. Andrea Petagna came on for the Nigerian with seven minutes left on the clock, but his goal was all Napoli needed to rise to third on the table, three points behind AC Milan. It was Osimhen’s second goal in six matches [465 minutes of action].

Eberechi Eze is yet to decide on the country to represent at the senior level, and his first goal in the English Premier League will have ensured that both England and Nigeria will continue to duel on his allegiance. Eze, in his third start after his summer move from Queens Park Rangers, guided his shot over the wall and off the crossbar to give Crystal Palace a 2-0 lead. Palace beat Leeds United 4-1 to move to eighth on the EPL table.

Joe Aribo is fully back from the injury that laid him low for some matches. The Super Eagles midfielder followed on with a brace for Rangers in their 8-0 demolition of Hamilton Academical. His first goal arrived in the 19th minute of two deflections. His second, which came 17 minutes after his first, also went in off a deflection. The 24-year-old has now scored four league goals in seven matches. Rangers lead the Scottish league with 38 points from 14 matches.

Olanrewaju keeps racking up goals in the Europa League

Olanrewaju Kayode is yet to score a league goal for new club, Sivasspor in the 2020/21 Turkey Super Lig, but he is flying in the Europa League after scoring three goals in three matches. The 27-year-old scored the second goal of Sivasspor’s 2-0 win over Qarabag last Thursday to give the Turkish team some hope of making it out of Group I with their first points. In the league, Sivasspor are in 15t place, with a paltry eight points from seven matches.

Kelechi Iheanacho is also yet to score in the English league, but he has registered three goals in three matches in the Europa League. His brace came against their closest challengers in Group G, Portuguese side, Braga. The 4-0 win left Leicester City on top of Group G with the maximum nine points from the three matches. His first goal was a deft piece of skill to manoeuvre the ball past the goalkeeper from a tight angle. His second, a shot two minutes into the second took a wicked deflection to give the Foxes a 2-0 lead.