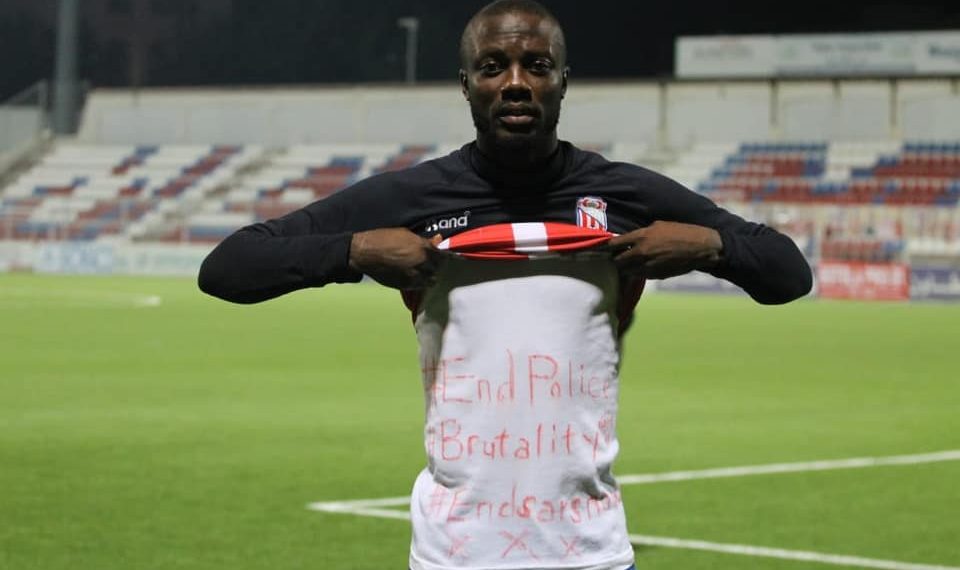 #EndSARS: How SARS officials demanded $1,000 from me – Nigerian Footballer

More Nigerian players are coming out to share their ordeal in the hands of officials of the Special Anti-Robbery Squad (SARS), a unit in the Nigeria Police Force, and also joining in the agitations to end the unit immediately.

Edjomariegwe, who currently plays in Morocco with Moghreb Tétouan, claimed  in a Facebook post that SARS officials demanded $1,000 when he was in the country last year for the holidays.

He wrote: “I remembered last year I came back and was stopped by Sars and they told me I was a suspect asking me to call my coach, captain and president of my team. They even asked me which police station I reported to when I came into the country, Even after seeing all evidence of me and my job on youtube and google, they still took me to a police station and ask me to come behind the station while smoking all sorts of stuffs weeds and the rest asking me to pay 1000$. It’s pathetic and annoying seeing the harassment extortions and killings. We nor do again oga president. #Endsarsnow

In the past days, there have been widespread protests across the country as many have expressed their reservations particularly against the activities of the Special Anti-Robbery Squad (SARS).

Among other things, SARS officials have been accused of harassment of citizens, intimidation and extra-judicial killings in the discharge of their duties across Nigeria.

Football players ,who are often flamboyant in their lifestyle with many enjoy wearing dreadlocks, dying their hair in different colours and the likes , have been wrongly profiled and harassed by SARS officials on many occasions.

Meanwhile, football superstars Wilfred Ndidi and Asisat Oshoala have added their voices to the #EndSARS campaign.

The two players wondered how wearing dreads or dyed hair would be a crime and jointly called for an end to police brutality.

Ndidi, on his Twitter account, wrote: “#EndSARS  for the safety of Nigerians… we are scared to visit home because the people who are meant to protect us are killing us. Looking good with dreads is not a crime…”

#EndSARS for the safety of Nigerians… we are scared to visit home because the people who are meant to protect us are killing us. Looking good with dreads is not a crime..

Oshoala ,on her Facebook Page, wrote: ”Some of us have good paying jobs and still like our HAIR like this…..DREADLOCK no be crime, to apply DYE for HAIR no be crime.

”And THANKS to everyone that wished me happy birthday yesterday….LOVE ALWAYS