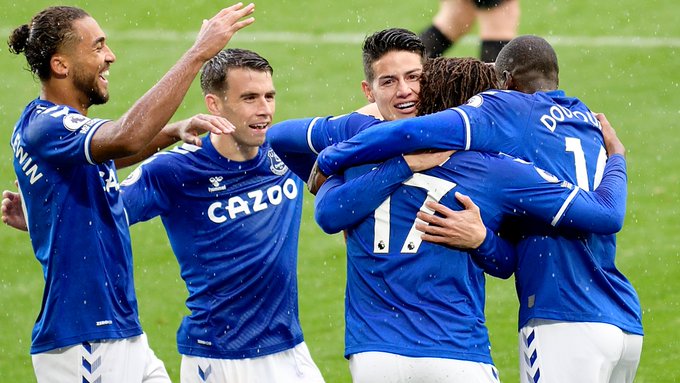 The Nigerian bagged an assist for the Toffees in Saturday’s home win.

Nigeria international Alex Iwobi and his Everton teammates continued their perfect start to the season on Saturday as they romped to a 4-2 win over Brighton in their Premier League tie at Goodison Park.

Iwobi made an emergency entrant for the Toffees in the 25th minute following the suspected ankle injury cupped by Richarlison.

He was on till the 90th minute, helping Everton to their fourth straight victory in the League and seventh across all competition this season.

7 – For only a second time in the clubs history, Everton have won their opening seven games of a season in all competitions (previously in 1894-95), whilst they have won seven consecutive matches for the first time since April 1987. Transformed. #EVEBHA pic.twitter.com/njTlRIYleH

The former Arsenal provided the assist for Everton’s third goal, a development that could help his chances in Carlo Ancelotti’s subsequent selections.

It was Colombian forward James Rodriguez that grabbed the headlines, scoring a brace as Everton deemed Brighton to go top of the Premier League table.

2 – James Rodríguez has scored 2+ goals in a league game for the first time since March 2019, when he netted a hat-trick for Bayern Munich against 1. FSV Mainz 05 in the Bundesliga. Arrived. #EVEBHA pic.twitter.com/YmSH0LAXbE

Yerry Mina got a goal while Dominic Calvert-Lewin, who was called up to the England squad this week, was also on target for his sixth goal of the season.

Saturday’s outing was Ancelotti’s 100th game in charge of a Premier League side and has 60 wins. Only five managers have won more in their first 100 matches than him: Jose Mourinho (73), Pep Guardiola (73), Manuel Pellegrini (65), Sir Alex Ferguson (62) and Roberto Mancini (62).

Elsewhere at Stamford Bridge, Chelsea returned to winning ways as they whipped Crystal Palace 4-0 in their Premier League derby clash.

In a game that was scoreless at the break, Chelsea came to life in the second half with Ben Chilwell scoring his first goal for Chelsea before Kurt Zouma made it 2-0 and Jorginho scored two penalty kicks to seal the big win for the Blues.

Two more games are to be played Saturday with Manchester City playing away against Leeds United and Newcastle United hosting Burnley at St. James Park.