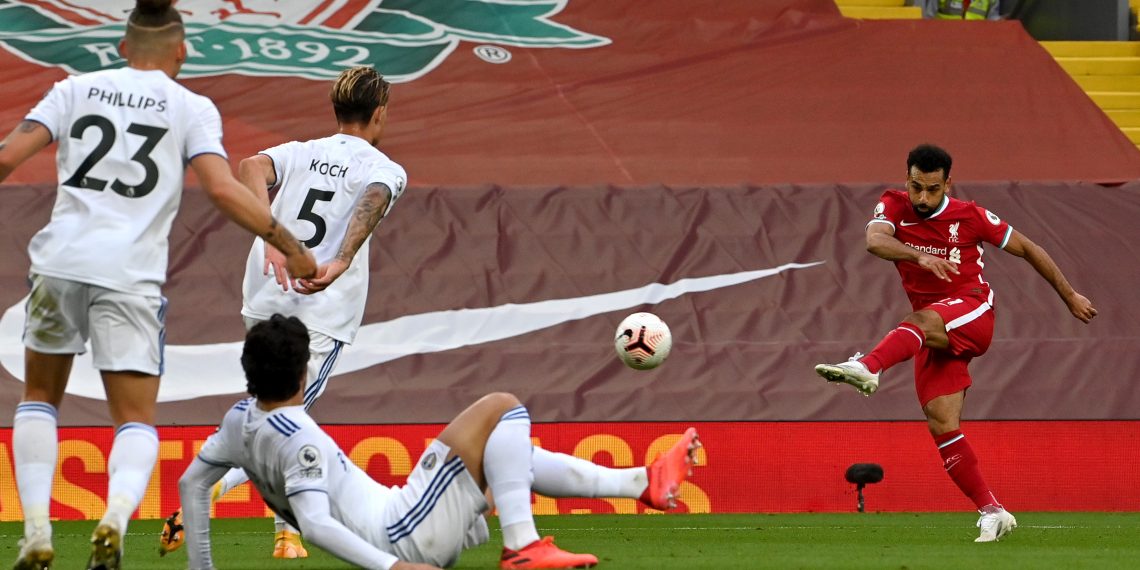 Liverpool started their Premier League title defense on a winning note on Saturday as the Reds battled to a 4-3 win over newly-promoted Leeds United at Anfield Stadium.

Mohammed Salah was the hero for the Reds as he netted a hat trick to spare Jurgen Klopp’s side their blushes in the nervy opening day cracker.

After watching newly-promoted Fulham crumble against Arsenal in the early kickoff, many were predicting that Leeds will also be taught some football lessons with their return to the elite division after over a decade playing in the lower division.

It only took Liverpool four minutes to get the first goal of the game and it was Salah that scored from the penalty spot.

The goal by the Egyptian made him the first-ever Liverpool player to score in opening day fixtures for four consecutive seasons.

Leeds were not ruffled by the early goal as they got the equaliser moments after in the 12th minute, as Jack Harrison exploited a Van Dijk error to make it 1-1.

The Dutch defender atoned for his error as he restored Liverpool’s lead in the 20th minute.

Uncharacteristically, Van Dijk failed to control the ball at 2-1 up, gifting Patrick Bamford the chance at an equaliser and the Leeds United made the most of the opportunity that he was given.

Salah was on hand to ensure that Liverpool won the first half, scoring what was his 51st home goal in just 63 appearances at Anfield as the first ended 3-2.

The last time an opening day fixture produced five first half goal was in 2006 when Manchester United took a 4-1 lead against Fulham.

Predictably, there was still plenty of drama in the second half as Mateusz Klich made it 3-3 for Leeds United.

1988 – Mohamed Salah is the first @LFC player to score a hat-trick on MD1 of a league season since John Aldridge against Charlton in 1988-89. Magic. pic.twitter.com/pI1YzYcywf

It was already looking like Leeds will get a point from Anfield until their hearts were broken with a late penalty given to Liverpool and Salah took it upon himself to take the kick which he scored and completed the first hat trick of the season.

Why some women menstruate during pregnancy – Gynaecologist