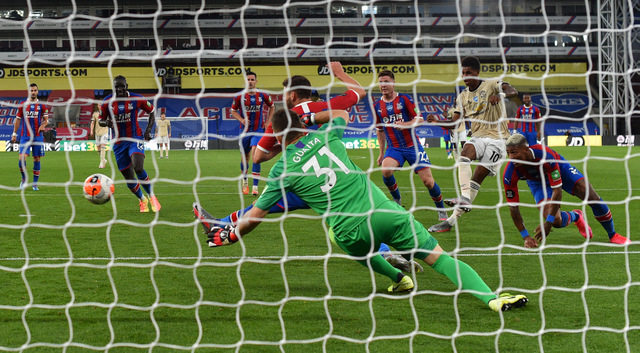 Manchester United and Leicester City have kept their hopes for Champions League football next season alive.

Though Ole Gunnar Solskjaer’s men were far from their best, goals from Marcus Rashford and Anthony Martial were enough to seal the victory at Selhurst Park.

Nigeria’s Kelechi Iheanacho was not considered for action at all on Thursday but the Foxes got the job done; taking the lead after 29 minutes when Ayoze Perez scored his eighth goal of the season.

The three points were wrapped up when Demarai Gray fired past Henderson to make it 2-0 for Brendan Rodgers’ men who will be travelling to London to face Tottenham in their next game.

At the other end of the table, Aston Villa missed a huge chance to help their survival bid as Theo Walcott’s late header saw them held to a 1-1 draw at Goodison Park.

Villa are three points behind West Ham and Watford, who play each other on Friday.

The Villains have got two games remaining now; Arsenal at home and then face West Ham United in the East End. Considering they are level with Bournemouth on 31 points and three behind the Hammers and Watford, their fate is out of their hands.

Meanwhile, Brighton just missed out on confirming their Premier League status for next season as they drew 1-1 at Southampton.

Graham Potter’s men will be disappointed they didn’t get the win tonight but they’re six points clear of the relegation zone with two games left.