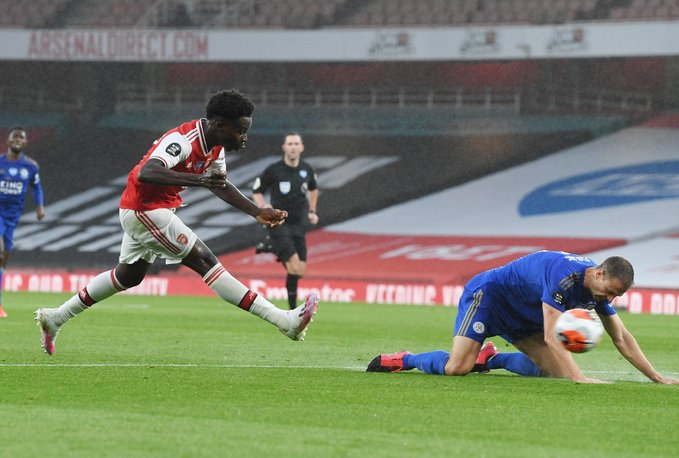 Bukayo Saka was among the top performers on Tuesday as Arsenal and Leicester City played out a 1-1 draw in their Premier League encounter at the Emirates.

The Nigerian-born youngster provided the assist that saw Pierre-Emerick Aubameyang shoot Arsenal in front in the 21st minute.

Only Kevin De Bruyne (19) and Trent Alexander-Arnold (14) have more assists among Premier League players in all competitions this season than Saka who is now on 12.

Arsenal held their lead all through the first half and even until the 84th minute before Jamie Vardy popped up with an equalizer for the Foxes.

With the solitary point, Arsenal’s late surge for a Champions League spot has suffered a setback as they are now 7th on the log with 50 points from 34 games.

As for Leicester City who have the Nigerian duo of Kelechi Iheanacho and Wilfred Ndidi in their team, they have dropped to the fourth spot behind Chelsea.

Chelsea bounced back from the defeat against West Ham with a 3-2 win over Crystal Palace at the Selhurst Park Stadium on Tuesday to boost their Champions League qualification chances.

Seven minutes after Willian Zaha smashed in a rocket to the top right corner of the post that left Kepa Arrizabalaga helpless.

With 30 minutes to go both teams scored two quick goals in the 71st and 72nd minute of the clash, it was Tammy Abraham bravery that got the goal for Chelsea while former Liverpool attacker Christen Benteke ensured his side had a respectable outing as he made it 3-2.

With the crucial away win, Chelsea are now third on the log while Crystal Palace are 14th.

In the other game also played Tuesday, Watford came from behind to beat Norwich City 2-1.