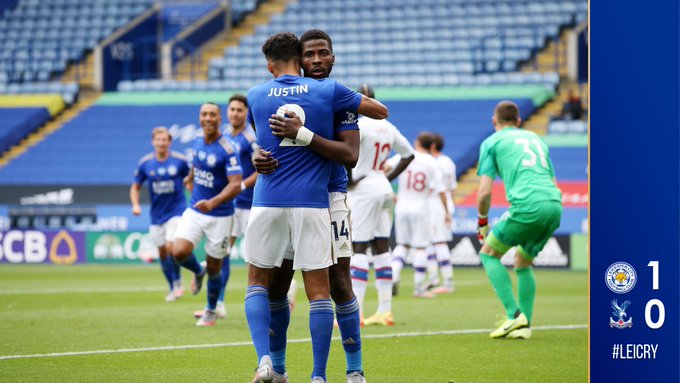 Nigerian striker Kelechi Iheanacho scored his second goal in two games as he helped Leicester City to a crucial 3-0 win over a stubborn Crystal Palace side in Saturday’s Premier League tie at the King Power Stadium.

Iheanacho had scored a goal in the midweek tie away to Everton and while that was just a mere consolation, Saturday’s effort proved even more crucial as it set the tone for the much-craved victory for the Foxes.

After a barren first 45 minutes, Iheanacho broke the deadlock four minutes into the second half when he finished from Youri Tielemans’ cross.

Jamie Vardy wrapped up the points for Leicester City with a late brace.

The first from Vardy came with the help of substitute Harvey Barnes, who pounced on an error by Mamadou Sakho before laying the ball in the path of the English striker.

That goal was Vardy’s 100th Premier League and the 33-year still had the chance for one more, scoring in the 90th minute to give Leicester City the comprehensive victory they needed to keep their top-four finish aspirations on track.

For Iheanacho, he has now scored 10 goals across all competitions this season.

At the Old Tafford, there were plenty of goals to savour as Manchester United came from behind to hit relegation-haunted AFC Bournemouth 5-2.

There was an initial scare for the Red Devils when the Cherries surprisingly shot into the lead in the 15th minute through Junior Stanislas.

United, however, responded with two goals, first from Mason Greenwood and then Marcus Rashford from the penalty spot.

Just before half time, in form French striker Anthony Martial helped extend United’s lead as he scored what was his 10th goal in the calendar year 2020.

While it was expected that it would be one-way traffic in the second half, the visitors attempted a comeback as they halved United’s lead from the penalty spot as Joshua King made it 3-2 in the 49th minute.

Hopes of a comeback for Bournemouth were extinguished when Greenwood completed his brace to make it 4-2 and talisman Bruno Fernandes capped another wonderful performance with a sumptuous goal to end Saturday’s tie 5-2.

Saturday was the first time Manchester United would score five goals at Old Trafford in the Premier League for the first time since December 2011 vs Wigan (5-0).

APC irresponsible to link me to Hushpuppi – Saraki