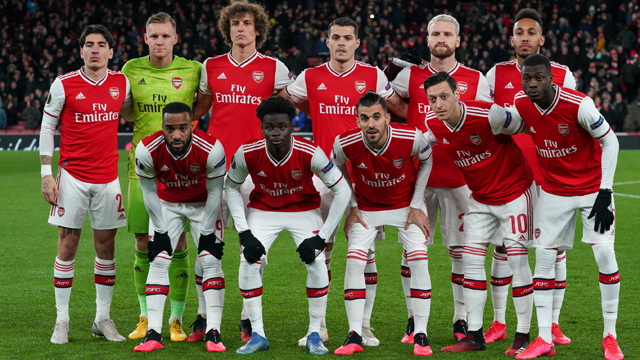 Arsenal’s inconsistencies in the English Premier League this season continued Wednesday night as they were roundly beaten 3-0 by reigning champions Manchester City at the Etihad Stadium.

After almost 100 days of suspended action in the Premier League due to the coronavirus pandemic, life returned to the top division on Wednesday and it was business as usual for Pep Guardiola’s men who continued their dominance over the Gunners.

It was Raheem Sterling that broke the deadlock late in the first half before Kevin de Bryune scored from the penalty spot after David Luiz was sent off for a foul five minutes into the second half.

This infamously made the Brazilian the first player to be sent off, concede a penalty and commit an error leading to an opposition goal in a Premier League match since Carl Jenkinson for West Ham vs Bournemouth in August 2015.

While it was already looking bad for Arsenal, Phil Folden in the 90th minute made it worse as he put the icing on the cake for the Cityzens with the third goal of the game.

With this latest win, City have now beaten Arsenal in six straight games and conceding just one goal against the London club.

On the flipside, Mikel Arteta who was unbeaten in all seven of his away games in all competitions for the Gunners has seen his good run ended by his former team.

Pep Guardiola’s side have now closed the gap on leaders Liverpool to 22 points with nine matches to wrap up the season.

Arsenal on their part are 9th on the log with 40 points from 29 games and their chance for a top-four finish is getting slimmer by the day as they are now 8 points adrift of 4th placed Chelsea.

In the other Premier League game also played on Wednesday, Aston Villa and Sheffield played out a barren draw.

Great news on COVID-19 treatment – but not good enough yet