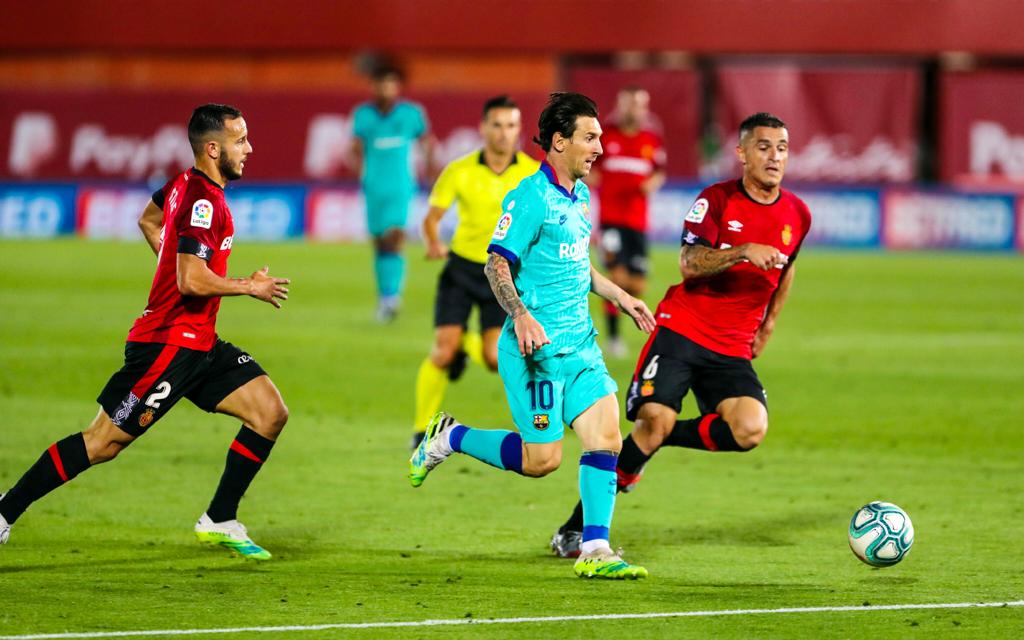 Lionel Messi put the icing on the cake as Barcelona romped to a 4-0 win over Real Mallorca on Saturday night as action continued in LaLiga.

Barcelona got two goals in each half as they literally continued from where they stopped before the enforced Coronavirus break.

It was Chilean forward Arturo Vidal that set the tone for the night as he headed Barca in front 65 seconds after kick-off.

While many would have thought the early goal will dampen the morale of Mallorca they took the game to Barcelona but just could not an equaliser.

Instead, it was the Catalan giants that increased their lead just before half time with Braithwaite registering his maiden goal for Barcelona since joining from Legganes.

In the second half, Mallorca tried to turn the tables but they were let down with their poor finishing and at other times by the spectacular show by the Barcelona keeper.

As the game progressed, Barca found a way to further increase their lead this time through Jordi Alba before Messi who had provided two assists made sure he registered his name on the scorers’ sheet to make it 4-0.

The goal by Messi was his 20th of the season as Barcelona now have a five-point cushion at the top of the log ahead of their fierce rivals Real Madrid.

Real Madrid can cut lead if they do the needful in Sunday’s home game against Eibar.

In the other Saturday LaLiga games, Nigeria’s Samuel Chukwueze came on as a 56th-minute substitute ad his team Villareal snatched a late lone goal away victory over Celta Vigo.

However, it was not the same for the Super Eagles duo of Kenneth Omeruo and Chidozie Awaziem who lost 2-1 at home with Legannes against Real Valladolid.