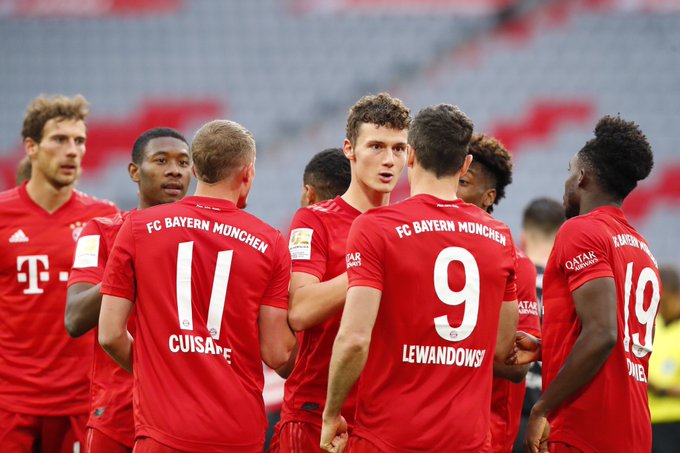 Bayern Munich are on course for another Bundesliga title following their 5-0 thrashing of Fortuna Dusseldorf on Saturday away from home.

Still basking in the euphoria of their crucial victory away to Borussia Dortmund during the week, the Bavarian ensured they extended their lead at the top of the Bundesliga table to 10 points with Saturday’s comprehensive victory.

It took Bayern 15 minutes before they registered their first goal against Fortuna and unfortunately for the hosts, it was an own goal from Zanka.

From then, Bayern never looked back as they doubled their lead just before the half-hour mark through one of their full-backs Benjamin Pavad.

Robert Lewandowski ensured Bayern went into the half time break with a three-goal advantage as he scored in the 43rd minute what was his first-ever goal against Fortuna Dusseldorf.

With that goal, the Polish completed a full set of Bundesliga clubs that he has scored against for either Bayern Munich or Borussia Dortmund.

Bayern continued from where they stopped in the first, scoring two more goals barely seven minutes into the second half.

There could have been more goals on the night but the Fortuna goalkeeper ensured his team was not totally annihilated by the rampaging Bayern Munich team.

Bayern need nine points from the last five games to clinch the title.

Elsewhere, it was another bitter tale for Nigeria’s Taiwo Awoniyi and his Mainz teammates as they were condemned to a lone goal defeat in the hands of Hoffenheim.

The home defeat keeps Mainz firmly rooted in the relegation zone and are now in a race against time to beat the drop.

Also in the bottom half of the table, Schalke 04 free fall continued as they lost against the ever-improving Werder Bremen at home.

Hertha Berlin have seemingly forgotten their pre-break poor form and won 2-0 against Augsburg, while Wolfsburg fell to Eintracht Frankfurt 2-1.

Tension mounts between Uniuyo, host communities over demolition of buildings