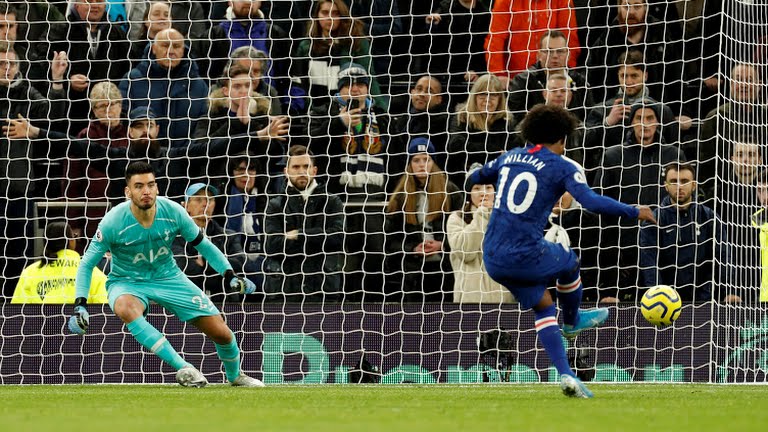 Brazilian star, Willian, was the hero for Chelsea as he scored the two goals that gave the Blues a resounding victory over Tottenham Hotspur in Sunday’s London Derby.

Going into Sunday’s derby tie, many had highlighted the fact that Jose Mourinho had won 12 and lost none of his 13 home games in all competitions against sides he’s previously managed.

That impressive record was, however, rubbished in the Super Sunday clash in London as a master class performance by Willian helped Chelsea to all three points as they hold to the fourth spot on the EPL behind Liverpool, Leicester City and Manchester City.

Willian put the Blues into the lead during the early stages, before a wild challenge from Paulo Gazzaniga on Marcos Alonso gave the Brazilian the chance to double his side’s lead before the break.

Spurs’ misery was compounded during the second half as Son was dismissed for kicking out at Antonio Rudiger, leaving Chelsea to see out the rest of the game with relative ease.

After four defeats in their prior five league matches, this represented a much-needed win for the Blues and their manager Frank Lampard who incidentally admits Mourinho is his mentor.

In the next round of games, Spurs will be hosting Brighton and Hove Albion on December 26. Chelsea will also be home at Stamford Bridge where they will be up against Southampton later on Boxing Day.