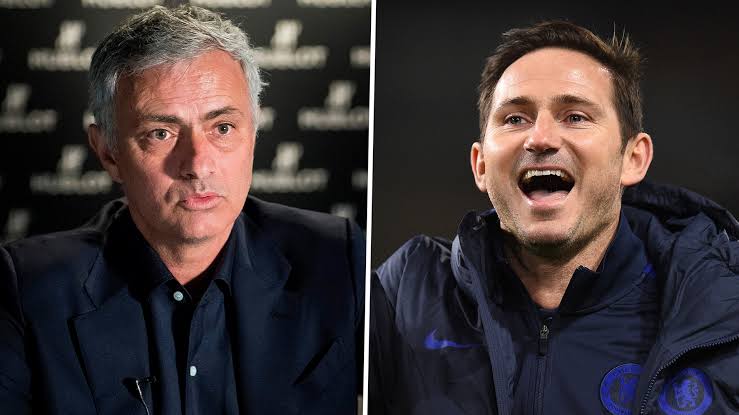 It is another chance for Jose Mourinho to take a dig at one of his former clubs but more importantly an opportunity for Spurs to break into the top four having spent most of the season outside the coveted zone.

Mourinho has overseen four wins from his five league games in charge of Spurs so far, whereas Frank Lampard’s Chelsea have suffered a wildly contrasting run of form with four defeats from their last five.

Aside from the poor run of form of Chelsea, a look into the history books show that Mourinho has never lost a home game against a team he has previously managed; winning 12 of 13 such matches.

If indeed the Portuguese manager pulls this one through with another victory on Sunday that would see Tottenham win three successive Premier League games for the first time since February.

While many would regard Lampard as an apprentice to Mourinho, the former has already gotten one over his former boss in the dugout when his Derby County side beat Manchester United last year.

With so much to play for in this London Derby, we anticipate an entertaining tie at the Tottenham Hotspur stadium.

The game is officially underway!

A bright start by Chelsea, who are spraying the ball from left to right trying to find those pockets of space.

Tottenham Hotspur have a dangerous throw-in.

A chance for Chelsea but Tammy Abraham misses with an attempt on goal.

Abraham again, he tries to turn Toby Alderweireld inside the penalty area but the Spurs defender, who gets a right block

Chelsea really trying their luck, Antonio Rudiger gets in a strike but fails to hit the target

Corner kick for Chelsea and Willian takes it for the visitors

A fine assist from Mateo Kovacic.for Willian and the Brazilian has the opening goal of this London Derby

A free-kick to Chelsea in their own half.

Another Chelsea chance … Tammy Abraham strikes but his header is cleared.

Spurs are really struggling. Zero efforts on goal and barely more than three passes strung together.

That nonetheless, Chelsea really need to be cautious.

We are more than halfway through the first half, it is Tottenham 0-1 Chelsea

Chelsea’s Mason Mount of Chelseagets in a strike, but is off target.

Finally… Tottenham Hotspur’s Harry Kane breaks free at but his effort goes wide of the post.

Action resumes for the second half

Free-kick to Chelsea FC in their own half.

Chance! Marcos Alonso with a shot on target but the Spurs goalkeeper makes a save

YELLOW CARD: Moussa Sissoko for Tottenham Hotspur is the latest player to be booked by the referee

Tottenham Hotspur are down to 10 men after Son Heung-min has been shown a red card.

After a long VAR check, Son is sent off!

YELLOW CARD: This has been a very physical encounter as Antonio Rudiger becomes the latest player to be booked… This game has witnessed seven yellow cards and one Red card has been booked

Double change for Chelsea: Michy Batshuayi in for Tammy Abraham while Reece James takes the place of Cesar Azpilicueta

Eight minutes of injury time will be added to the second half.

Chance..Michy Batshuayi gets in a strike, it misses the target, however