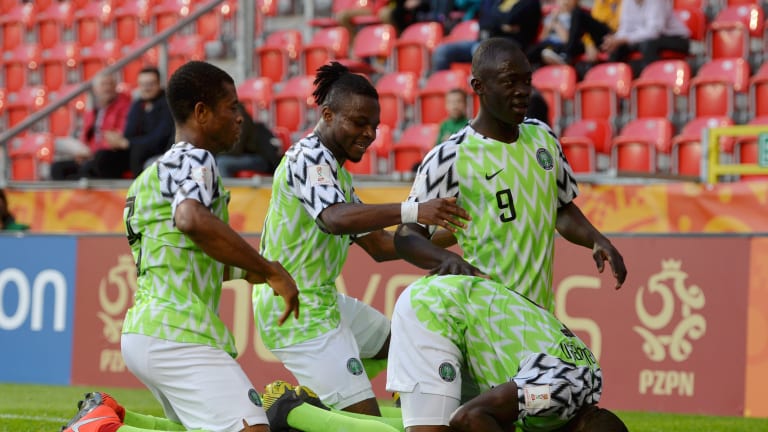 The Flying Eagles celebrating one of their goals

Chinonso Emeka saved the day for Nigeria as the Flying Eagles grabbed a 2-2 draw against Morocco in their final Group A game on Friday night in Rabat.

Morocco, who are the hosts, were handed a walkover (3 points and 3 goals) against South Africa and needed a win to pull through against the Flying Eagles who needed a win or draw to progress.

It was the hosts that grabbed the opening goal of Friday’s encounter through Abba Mohsinne early in the first half before Ahmad Ghali won a penalty for the Flying Eagles after being fouled in the box.

Plateau United midfielder, Ibrahim Abubakar fluffed his spot-kick as it was saved by the Morocco goalkeeper. His rebound made way into the net to level for the Flying Eagles before half-time.

Morocco won a penalty of their own in the 54th minute and went back in front before Chinonso Emeka grabbed a last-minute goal to put the Flying Eagles to the semi-finals.

Burkina Faso defeated South Africa 4-0 in the other group game to finish top of the group with 7 points while Nigeria are second with 5 points from three games.

The Flying Eagles will play the winner in Group B next Tuesday in the semi-final.

Meanwhile, the female team, the Falconets, are also through to the semi-finals as Nigeria stay on course for double gold in the football event.